By Newsroom on April 5, 2018Comments Off on Strongbow Hard Ciders Invites America to Drink Rosé the UK Way 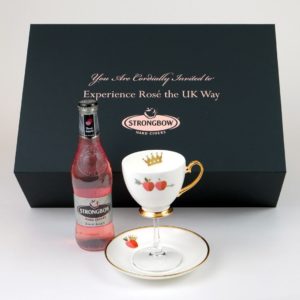 All eyes are on the UK right now as Americans become more fixated on the Brits in anticipation of two Royal Weddings this spring and another royal baby. Produced by H.P Bulmer, a cider company with 125-year British lineage and a coveted Royal warrant, Strongbow is inviting Americans to raise a glass and toast the celebration with the introduction of new Rosé Apple Hard Cider. To commemorate these royal blessings, Strongbow is tapping into the fervour with a limited edition Royal Rosé Teacup Set.

Strongbow is embracing America’s other obsession, rosé wine, and taking it to the next level with new Rosé Apple. Rosé Apple is a semi-dry cider that gets its rosé colour from a touch of red-fleshed apples. And with 50% less sugar than the other leading hard ciders, Strongbow Rosé Apple is a brilliant new way to drink rosé. With layers of light, bubbly and fruity flavour, it’s a cheerful and refreshing take on rosé wine which makes it the perfect complement to gatherings and celebrations with friends, such as Royal Wedding viewing parties.

“As England’s number one hard cider brand, we are thrilled to introduce a new way to drink rosé with Rosé Apple and a spirited take on tea time with our Royal Rosé Teacup Sets,” said Jessica Robinson, Vice President, Portfolio Brands. “Through the union of our British heritage and a modern twist on rosé, we are marrying two of America’s latest obsessions just in time for the fairytale Royal Wedding this spring.” 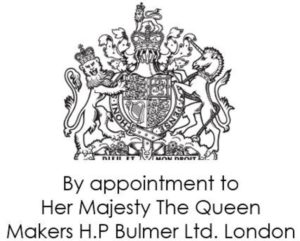 More than 23 million people are expected to watch the nuptials when one of America’s popular personalities ties the knot with a royal Brit on Saturday, May 19, 2018. To help America cheers to this occasion with their own tea party, Strongbow has partnered with renowned British designer Stanley Chow, whose award-winning illustrations can also be found in The New Yorker magazine and the New York Times Magazine. Together with Chow and an English china house, Strongbow is creating limited-edition Strongbow Royal Rosé Teacup Sets for the festivities.

Chow said he was inspired by the symbolism of the apples and the archetype they represent. “By showcasing two apples unified by an arrow, we are representing the ingredients in rosé cider and expressing the love and union between the soon-to-be newlyweds,” said Chow. “We also added a bit of British fantasy by putting a royal crown jauntily cocked to the side of an apple on the saucer.”

Strongbow offers an award-winning range of gluten-free hard ciders made from apples and other natural flavours that are produced and imported from their own orchards in the UK and Belgium. Strongbow flavours include Gold Apple, Artisanal Blend, Cherry Blossom, and new Rosé Apple, which is available now nationwide.

America will have the chance to try all four flavours this April, when Strongbow will offer more than 1 million limited-edition mini-can trial packs at the suggested retail price of $1.50. All Strongbow products contain no artificial flavours or colours.