London has become a city without a bell due to Big Ben’s refurb, but thanks to Taco Bell, that’s no longer the case.

On November 20, the fast-food chain chimed in with a sound that London has been missing for over a year: Big Ben’s bells. As the infamous clock is under scaffolding for reconstruction, Big Ben’s popular chimes have also been under wraps.

Taco Bell, along with agency Edelman Deportivo, seized the opportunity to surprise and delight Londoners with a sound of their own: its signature bell digitised to recreate the Westminster chimes.

The move marks the world’s leading Mexican-inspired restaurant’s entry into London, one of the brand’s most requested cities for entry. The first London Taco Bell, located in the Hammersmith district, opens November 23, and based on recent U.K. openings that have received tremendous fanfare, it’s sure to have hundreds of fans lining up for blocks.

Fans of Taco Bell will remember its infamous 1996 April Fool’s Liberty Bell prank, in which the brand advertised it had bought the Liberty Bell and renamed it the ‘Taco Liberty Bell’, before revealing the story was a hoax and announcing a contribution to the upkeep of the Liberty Bell. In this same lighthearted vein, Taco Bell brought some humour into Londoners daily commutes, as they passed by Big Ben and heard a new twist on the Westminster Chimes.

To create this new take on the chimes, the brand worked with an audio engineer to compose the chimes out of Taco Bell’s iconic bell. The chimes were blasted through parametric speakers in the area surrounding Big Ben on November 19, causing quite the stir among Londoners days before Taco Bell’s first London restaurant opening. 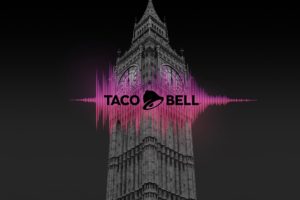 “Restoring Big Ben’s bell with our bell was the perfect way to introduce ourselves to London in a way only Taco Bell can,” says Marisa Thalberg, global chief brand officer at Taco Bell. “We don’t take ourselves too seriously and have been known to play a prank or two. We hope our unique twist on Big Ben’s chimes brought surprise and humour to Londoners; this was our little arrival gift as we gratefully show up on London’s doorstep.”

Jamie Cordwell, creative director at Edelman Deportivo, adds: “Taco Bell is an iconic brand with a distinctive sound, what better way to make noise about them coming to town than to cover for the world’s most famous bell – Big Ben.”

After the first Hammersmith restaurant opens, three more Taco Bells are set to open across London in the coming months, joining the brand’s 28 other restaurants across the U.K. The new London locations include:

“We’ve had our sights set on London for quite some time, and as we continue growing internationally, we’re excited to bring Taco Bell to one of the world’s largest cities – and one of our most-requested markets,” said Liz Williams, president of Taco Bell International. “We’ve seen an overwhelmingly positive response to our U.K. restaurants, and have ambitious plans for growth in London and the broader U.K., targeting more than 30 U.K. restaurants by the end of the year.”