By Newsroom on November 1, 2016Comments Off on Tetley’s Awesome Woman Drops In for Latest Campaign from Creature of London

Tetley is launching a heroic £5m campaign to support its pioneering range of Super Teas – their biggest marketing drive yet outside black tea. 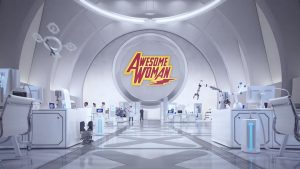 Tetley Super Teas were the first teas to be launched in the UK with functional health benefits and carry EFSA approved health claims. With over one million shoppers the range has delivered sales of £3.3 million since their launch.

To spearhead the new Supers marketing campaign which aims to promote the health benefits and breadth of the range, Tetley is introducing Awesome Woman and her trusty sidekick Ina Ventor.

Created by Creature of London, the new 30 second TV ad will air on 1st November during Pride of Britain Awards, featuring Awesome Woman and her super hero adventures. 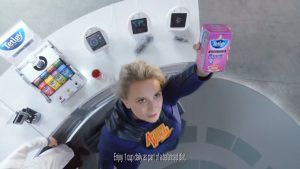 In the ad, even superheroes have their off days and Awesome Woman is no exception – Ina Ventor steps in to give her a helping hand and get her back on track, showing that we could all do with a boost every now and then. Cue Tetley Super Tea ‘Boost’ with added vitamin B6, to help reduce tiredness and combat fatigue.

The range also includes Tetley Super Tea ‘Immune’, expertly blended fruit tea with the benefit of vitamin C to help support the immune system – the perfect gadget to arm yourself with as flu season approaches. 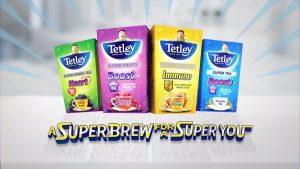 Alex Snowden, Senior Brand Manager at Tetley, comments: “Tetley’s range of Super Teas with superior taste from its use of natural flavours and the benefit of added vitamins has struck a chord with health conscious shoppers. Our mission now is to extend the appeal of the products and Awesome Woman will encourage consumers to explore what the Super Tea range has to offer.”

Stu Outhwaite, Creative Partner at Creature of London said: “How Hollywood managed to overlook Awesome Woman, a caped crusader who’s not necessarily at her best without a cup of Tetley’s new range of Super teas, we’ll never know. But bully to us for having signed her up to promote a bunch of really good new brews.”

The ‘Awesome Woman’ TV ad will be underpinned with a heavy weight multi media activity including; Cinema, VOD, outdoor and print, shopper, digital and PR.

Tetley’s Awesome Woman Drops In for Latest Campaign from Creature of London added by Newsroom on November 1, 2016
View all posts by Newsroom →