By Newsroom on October 7, 2016Comments Off on The Macallan Unveils Double Cask 12 Years Old 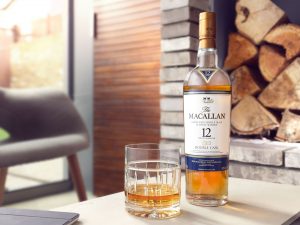 The Macallan, the world’s ultimate luxury single malt Scotch whisky, proudly introduces The Macallan Double Cask 12 Years Old to its core range in the US on October 6.

The distinctive new whisky marks the first time the distillery has used American Oak Sherry-seasoned casks as the most prominent flavour style in an expression of The Macallan, which creates a complex yet approachable flavour profile.

With traditional Sherry-seasoned casks from both sides of the Atlantic, and defined by an unmistakable American Oak style, Double Cask brings a unique new style of The Macallan to complement the existing core range.

To create Double Cask, The Macallan brings new oak from America thousands of miles to Spain, where the oak casks are crafted and Sherry-seasoned before traveling to the Macallan’s distillery on Speyside to mature for at least twelve years. These whiskies are then harmoniously united with those aged in exceptional Sherry-seasoned European oak casks.

The Macallan Double Cask 12 Years Old is 100% Sherry seasoned, and 100% Natural Colour, in keeping with The Macallan’s tradition, but unique in the fact it is defined by the unmistakable prominence of the American Oak style. American Oak has less tannin and allows more vanillin to shine through, giving off sweet and fresh fruit flavours, which creates a refreshing style of whisky unique to Double Cask, which is ideal for all occasions. 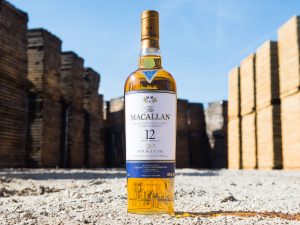 “By combining wood influences, we have been able to produce a new Macallan which sits perfectly between our existing Sherry Oak and Fine Oak ranges,” explains Bob Dalgarno, The Macallan Master Whisky Maker. “The delicate flavour of American Oak – vanilla, citrus and fresh oak — is at the forefront, along with the traditional Macallan character of dried fruit and wood spice. Fresh and approachable in style, this expression of The Macallan is rich in flavour, honeyed and indulgent, and has a full, viscous mouthfeel, which makes it a great complement to The Macallan Sherry Oak 12 Years Old.”

The whisky was also recently awarded 95 points (“Exceptional”) in the 2016 Beverage Institute Tastings competition. Described as “A superb sherried highland malt that is a sheer pleasure to drink,” Double Cask was the joint-highest placed Scotch whisky this year.

With a suggested retail price of $65 per bottle, The Macallan Double Cask 12 Years Old is available now at your local fine spirits purveyor.