By Newsroom on January 17, 2018Comments Off on The Macallan Unveils the 1977 Fine & Rare Vintage Bottling 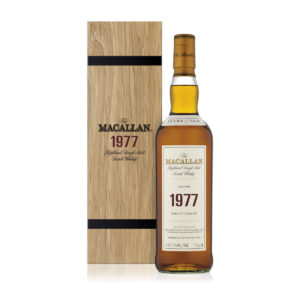 The Macallan, the world’s most admired single malt Scotch whisky, has unveiled a new release in its highly regarded Fine & Rare collection, the 1977 vintage.

The Macallan Fine & Rare collection, created to identify the very best of The Macallan’s finest maturing stock, features some of the greatest vintage single malts ever released. The 1977 vintage – of which only 4 bottles are allocated to the US market this year – continues to add to the liquid history of The Macallan, offering new insights into the aroma and flavour characteristic of this exquisite single malt.

“The release of the 1977 Fine & Rare vintage adds an outstanding whisky to this collection of unique and mature expressions of The Macallan,” said The Macallan’s Master Distiller, Nick Savage. “The full, rich, classic Macallan body holds the supporting characters of sweet apples & vanillas, to give an all-encompassing whisky. A hint of peat in the background draws inspiration from The Macallan heritage, balanced with maturation in a smaller hogshead cask for a rich, yet delicate experience. The 1977 Fine & Rare vintage has reached its gentle maturity over 40 years and represents the classic Macallan style.”

Charlie Whitfield, Manager of Prestige Whiskies at The Macallan, said: “Now 15 years since its launch, with more than 50 individual vintages releases, The Macallan Fine & Rare Collection retains its status as one of the most iconic ranges within the world of single malt. The most recent vintage released took the collection up to 1991, but now we take a few steps back in time to the late 1970s. 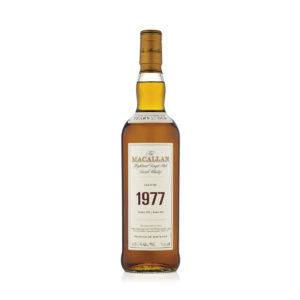 A superb single cask whisky from a memorable year, when cinema-goers were first introduced to George Lucas’ Star Wars and the world mourned the death of Elvis Presley. On The Macallan Estate on September 26th 1977, our predecessors filled one particular Hogshead, amongst many Sherry-seasoned casks, not knowing the fate that lay ahead 40 years later.”

Over the years, the Fine & Rare collection has underpinned The Macallan as the world’s most valuable and collectable single malt whisky, dominating auctions around the world and setting world record prices, both at auction and private sale.

The 1977 Fine & Rare vintage comes from Cask No.8661 and has an ABV of 48.5%. The release will be limited to 4 bottles in the US market this year, with a similar amount expected next year. There is a suggested retail price of approximately $15,000 USD per 750ml bottle.

The Macallan Unveils the 1977 Fine & Rare Vintage Bottling added by Newsroom on January 17, 2018
View all posts by Newsroom →