By Newsroom on February 16, 2017Comments Off on The Original Smiley Brand and Vittel Team-up to Launch Smiley Branded Water in Europe 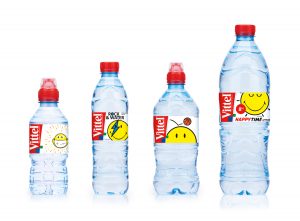 The Smiley Company have teamed up with Vittel to create an on-pack promotion to help promote the globally recognised water brand’s smaller format bottles in 2017.

This exciting partnership will see Smiley’s world famous icons feature on 33, 50, 75 cl and 1 litre bottles in a bid to boost sales and brand awareness. With 130 million Smiley branded Vittel bottles entering in to the Belgium, French German, Russian and Swiss markets between February and October 2017.

This exclusive partnership will form part of Smiley’s 20th anniversary celebrations throughout 2017, when the brand will celebrate creating the world’s first digital Smileys in 1997. This landmark innovation sparked a digital revolution that led to billions of Smileys being sent across the world and the birth of the world’s first emoticon-inspired lifestyle brand – SmileyWorld.

Speaking about the collaboration, Smiley CEO Nicolas Loufrani said, “A recent market research campaign that we conducted shows that Smiley packaging really helps to sell products. Smileys elevate on-shelf stand out, improves positive perception of products and increases purchase intent and these key USP’s will help boost Vittel’s presence in the smaller format market. We have created a range of different and exclusive Smileys to help Vittel position its different formats that include themes aligned to a variety of key consumers being targeted by Vittel, that includes; kids, fitness, work and lifestyle, and will all feature a range of Smileys to complement that particular theme.”

As well as the on-pack promotion, both brands will collaborate on a wide range of marketing activations that will include digital billboard advertising in key retails sites, catalogue advertising in key supermarket chains and an al encompassing social media campaign with a range of exciting video adverts.

This exciting campaign “Vittel The Positive Water” is launching this month.