By Newsroom on November 15, 2016Comments Off on The Sainsbury’s Christmas Ad is Full of Stop Motion Singalong Goodness

Sainsbury’s has unveiled a joyful new Christmas advertising campaign, which highlights the importance of sharing the gift of time with family and friends this Christmas.

The Christmas musical style ad by AMV BBDO, has been created and produced in the UK using state of the art stop frame animation techniques, and the full length 3”20 version will be revealed to the nation for the first time on Monday 14th November on the Sainsbury’s Facebook, Twitter and YouTube channels in a social media first launch. 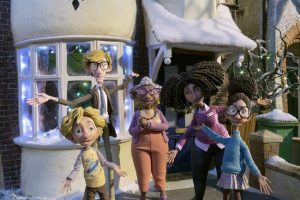 Titled ‘The Greatest Gift’, the ad will help raise vital funds for Great Ormond Street Hospital Children’s Charity. All the money raised will go towards providing accommodation for families of children at the hospital.

Directed by award winning Sam Fell, the new advert tells the charming tale of Dave, a hard-working and devoted dad, who comes up with an ingenious plan to make sure he can be with his family for Christmas. Beautifully animated for the screen, Dave’s story is told via an original, joyful and humorous song ‘The Greatest Gift For Christmas Is Me’, voiced by British actor James Corden and composed by Bret McKenzie, a comedian, musician and producer who won the 2012 Oscar for best original song in The Muppets.

The film opens with Dave in the animated town of Bisby, where he is slightly overwhelmed by the busy Christmas season. One night when he returns home late, he finds his children fast asleep in bed, only to spot a gingerbread man decorated to look just like him. He has a brainwave – and goes to the toy factory he works at to create a series of replica versions of himself in all shapes and sizes – tapping monkeys, nodding dogs, toy planes and dancing robots. By sending them to all the places he should be, he manages to make it home in time to be with his family and join in their much-loved Christmas celebrations. 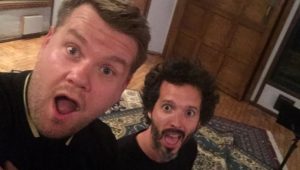 The campaign is designed to entertain children and families across the UK, as well as raising funds to help Great Ormond Street Hospital families be together at Christmas and throughout the year.  All profits from the sale of the specially created Gingerbread ‘Dave’ (£1) and The Greatest Gift film animation kit (£5) will go to Great Ormond Street Hospital Children’s Charity. This year, there will be a further donation option available for customers to ‘round up’ to the nearest pound at the checkout, with all the proceeds going straight to the charity.

Tim Johnson, CEO, Great Ormond Street Hospital Children’s Charity, comments: “We’re delighted to be Sainsbury’s official charity partner this year. At Christmas, time spent with the people you love is precious. For the families of patients at Great Ormond Street Hospital who are unable to go home at Christmas, this is particularly true. More than half of the patients at Great Ormond Street Hospital live outside of London, and many are hours away from home. Thank you to Sainsbury’s and everyone who supports us through this initiative. The money raised will enable us to help more families be together when they really need to be, by providing dedicated accommodation right next to the hospital. This is a vital resource, enabling parents and carers to be at their child’s bedside within minutes, at whatever time of the day and night. We couldn’t be happier to be involved in this campaign and hope everyone enjoys the advertisement and supports this special partnership.” 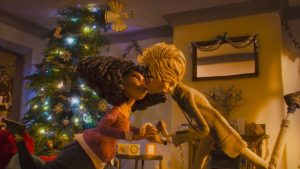 Sarah Kilmartin, Head of Broadcast Comms, Sainsbury’s, comments, “Christmas is for Sharing has been a constant theme for our Christmas ads for the last three years and it continues to have real resonance for our customers. This year is no exception and we think many families will be able to relate to the idea that Christmas can be such a busy time that it can be hard to prioritise simple family time together. We hope our advert will remind people of that while providing some light hearted entertainment for the whole family to enjoy.

“Supporting Great Ormond Street Hospital Children’s Charity felt like a very natural extension of this as we know that the families at the hospital face more difficulties than most to spend time together as a family, at Christmas and all year round.”

The animated world of Dave will also be reflected in the Sainsbury’s traditional food focused Christmas advertising campaign, due to launch on 18th November. Through a mixture of stop frame animation and live action to showcase the delicious food on offer at Sainsbury’s this year, the film also celebrates the role food plays in bringing people together at Christmas.

The Sainsbury’s Christmas Ad is Full of Stop Motion Singalong Goodness added by Newsroom on November 15, 2016
View all posts by Newsroom →