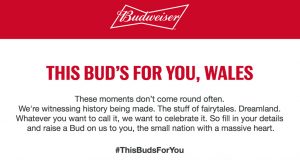 Budweiser will be giving away potentially millions of bottles of free beer as part of the celebration, honouring the unwavering commitment of Welsh football fans for one day only on 6th July 2016. To claim their complimentary Budweiser, those of legal drinking age, and over who are living in Wales should do one of the following:

If you don’t fancy an alcoholic drink, don’t despair – Beck’s Blue and Beck’s Blue Lemon is also available for anyone not drinking alcohol and wants to show their support. 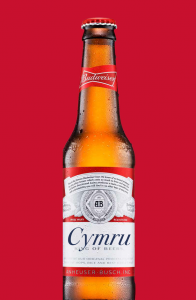 The beer brand will also be delivering limited edition, 660ml bottles of Budweiser re-labelled to say ‘Cymru’ – “Wales” in Welsh – to the likes of Chris Coleman and the Welsh national football team, as well as other notable Welsh personalities, to continue to celebrate the nation’s recent sporting performance.

With one of Budweiser’s biggest breweries based in Magor, Wales, the brand has close ties to the Welsh community and is keen to get behind its football fans and celebrate its national team’s recent success.

Steph Okell, Marketing Manager, Budweiser UK, says, “At Budweiser, we’re all about celebrating epic moments like this. We’re proud to have one of our biggest breweries based in Wales, and even prouder to be able to celebrate the passion and commitment of all the Welsh fans out there by raising a Bud for them today. This Bud’s for you Wales – congratulations!”

For those in Cardiff, Budweiser will be popping up at the city’s train station on Wednesday 6th July 2016 from 2pm – 6pm handing out redeemable vouchers to consumers, who can exchange them for a complimentary Budweiser at five different bars and pubs in Cardiff, where they can watch the big game unfold from. The venues included in this offer include Soda Bar, Bunker, Ten Mill Lane, Face 11 and Le Monde Hotel.