By Newsroom on November 15, 2017Comments Off on Tostitos Partners with The Salvation Army and Dak Prescott to Get Fans to ‘Chip In’ this Holiday Season 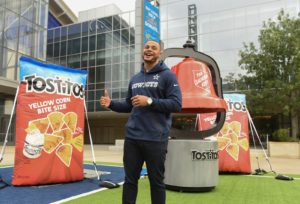 This holiday season Tostitos, one of the flagship brands from PepsiCo’s Frito-Lay division, is calling on snackers to not only give thanks as they get together with loved ones, but to also give back, through a partnership with The Salvation Army.

Tostitos will make a donation for every bag of its new Yellow Corn Bite Size tortilla chips purchased from now until the end of the year, up to $500,000, to support local Salvation Army chapters. The brand kicked off the partnership in its backyard to support the local Dallas-Ft. Worth community with the help of Dallas Cowboys quarterback Dak Prescott. Starting now, the program broadens US-wide so everyone can “chip in” across the country.

“The Salvation Army helps millions of Americans every year; it’s such an honour to partner with them to raise awareness and contributions for local communities,” said Pat O’Toole, senior director of marketing, Frito-Lay North America. “The Dallas area is home to Frito-Lay and obviously a special place for us, but we wanted this program to reach far and wide. By tying to our newest product offering, we’re able to do just that.”

Prescott will help raise awareness by starring in a Tostitos TV ad in support of the partnership premiering during the Thanksgiving Day broadcast of the Cowboys and Los Angeles Chargers, airing on CBS. Recently, Prescott unveiled the partnership with a larger-than-life ringing of the iconic Salvation Army Bell at The Star in Frisco, Texas, home to the Dallas Cowboys World Headquarters. The red bell replica — this version nearly 10 feet tall — will be featured at Tostitos Championship Plaza for events from Thanksgiving until New Year’s as a reminder to give back.

“I’m very fortunate to be where I am now, but it was definitely not always this way growing up,” said Prescott, whose mother worked as the manager of a truck stop while raising her three children. “There are so many people in need around the country, so any little thing I can do to help is awesome. I’m excited to partner with Tostitos on this program that really will make a difference.”

Purchasing Tostitos Yellow Corn Bite Size chips is an easy way for people to give back. The newest offering from Tostitos offers the crispness of your favorite chip, but in a bubbly, delicious bite-size form that’s perfect for dipping. But more importantly, they’re chips for a good cause.

Tostitos’ partnership with The Salvation Army will complement the longstanding, year-round relationship between the Cowboys and Salvation Army. The Dallas Cowboys’ primary community focus is rooted in the Jones family’s passion for and commitment to The Salvation Army. Since 1997, the Cowboys have dedicated their Thanksgiving Day halftime performance as a national showcase to kick off The Salvation Army’s Red Kettle Campaign — as a result, over $2 billion has been raised and more than 500 million people in need have been served.

Tostitos Yellow Corn Bite Size are available nationwide now for a MSRP of $4.29. With the purchase of any specially marked bag, Frito-Lay will donate to The Salvation Army.

Tostitos Partners with The Salvation Army and Dak Prescott to Get Fans to ‘Chip In’ this Holiday Season added by Newsroom on November 15, 2017
View all posts by Newsroom →