UBREW Wants You To Drink ‘Responsibly’

By Newsroom on May 4, 2017Comments Off on UBREW Wants You To Drink ‘Responsibly’

UBREW, a small craft brewery from London, cleverly fights competition by naming their new low alcohol beer “Responsibly”.The best part about the new beer is the way is taking advantage of the much-advertised message “Drink Responsibly”.

Matt Denham, Co-Founder at UBREW said: “Responsibly is a symbol of the revolution of craft breweries away from the big beer companies. But, in the end, IT IS a craft quality, low alcohol beer that is promoting a way to drink responsibly.”

Wilf Horsfall, Co-Founder at UBREW added: “We wanted to get the word out about our existing range of beers, as well as to get in on the action of the increasing market for low-alcohol beers. This beer and its hilarious campaign doesn’t take itself too seriously – but it is a serious pale ale, brewed in the proper way.”

Adrian Botan, Global Executive Creative Director McCann said: “We love brands and companies that are ready to challenge conventions in order to innovate in their sectors. UBREW is an amazing partner and had the guts to take this idea all the way.”

Alessandro Sabini, Chief Creative Officer McCann Worldgroup Italy said: “You know you have a golden project in your hands when everybody involved is committed and enthusiastic: from the client to the guy who’s editing your films. Responsibly has the power to ignite passion. We see a long bright future for this brand.” 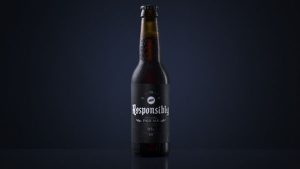 The beer is available from UBREW’s taproom (24 Old Jamaica Street), on UBREW’s website and at Ales By Mail.

The campaign, done by McCann Milan and Craft London, kicked off on social media with a series of online movies.

UBREW Wants You To Drink ‘Responsibly’ added by Newsroom on May 4, 2017
View all posts by Newsroom →