By Newsroom on April 6, 2017Comments Off on Unilever to Sell off Flora and Stork 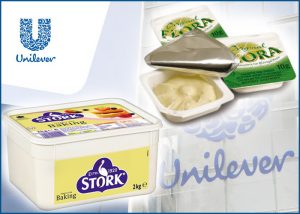 Unilever, which owns some of the UK’s most famous household brands, has announced plans to sell its margarine business, including Flora and Stork.

The move comes as part of a wide-ranging review at the Anglo-Dutch firm, which recently saw off a takeover bid from US food giant Kraft Heinz.

Unilever also intends to look at changing its historic status as a dual-listed company in two countries.

He said Unilever would not change its long-term business model, which he described as one of “sustainable value-creation”.

Alluding to the failed takeover bid, Mr Polman added that “the events of the last few weeks have pointed out that we have opportunities to drive further value in the business”.

Mr Polman said the firm would step up its cost-cutting, aiming for a 20% margin by 2020.

He said the margarine business was a “declining segment” that could be “better managed by others”.

Mr Polman said Unilever was studying whether to change its status and was looking at the wider “legal structure” of having bases in both the UK and the Netherlands. It will decide by the end of the year.

“Obviously it’s a very complex thing, the dual structure, and it requires the right focus to come to the right conclusions, but it will certainly simplify our organisational structure,” he told the BBC.

Unilever to Sell off Flora and Stork added by Newsroom on April 6, 2017
View all posts by Newsroom →