V Energy Australia has launched the fourth instalment of its highly successful ‘The Massive Hit That Improves You A Bit’ positioning, with a campaign via TKT Sydney, that promises to be bigger than Biggie, and doper than Drizzy.

Directed by Finch’s Benji Wienstein, and shot on location in Miami, the new campaign is set against the backdrop of a $15m crib and comes complete with a polished hip-hop track, twerking back-up dancers, tricked out lowriders and a fierce entourage.

In the new spots, created by up-and-coming agency TKT Sydney, emerging megastar Lil Pup goes head to head with a V-drinking, better version of himself, Lil ‘Big’ Pup, in a rap-roasting of words and wit. 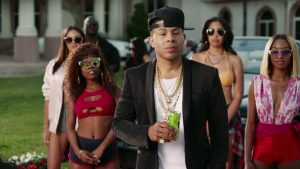 The campaign, which launched last night on TV, will also feature a full-length film clip which airs in-cinema, online, and across music video channels and will be supported by below the line activity.

TKT Sydney creative directors Ben Clare and Brendan Willenberg said the strength of the work comes down to the simple, universal truth that when you have an energy drink, you become a marginally better version of yourself.

Clare commented: “Creating communication platforms is a tricky business. Creating ones that endure and are celebrated for their creativity and effectiveness is trickier still.”

Karl Davies, head of energy, Frucor said: “We’re massively stoked with how ‘Rapper’ has turned out. The crew at TKT Sydney have once again successfully built on the huge success of our previous campaign. We have seen all our brand health metrics increase when our Massive Hit campaigns are running and we anticipate the new creative for 2017 to be the most successful yet.”