By on July 8, 2016Comments Off on Vitaminwater Recruits “Tryathletes” for Social Media Challenge 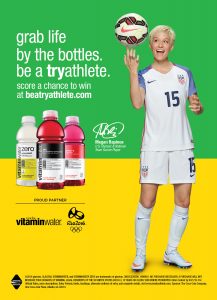 Every successful athlete shares a common, fearless commitment to never settle in their pursuit of the next big thing. This summer, vitaminwater is challenging consumers everywhere to adopt that same mentality and “be a tryathlete” — someone who is always in pursuit of vibrant new experiences.

Through the vitaminwater 2016 #beatryathletecontest, vitaminwater will reward consumers who live to try new activities and experiences. Fans are invited to showcase their inner tryathlete by documenting these experiences to vie for a series of prizes that includes an all-expenses-paid trip for four in February to Rio de Janeiro, Brazil, the host city of the Olympic Games in 2016.

“vitaminwater has always had an adventurous side, daring consumers to ask: what if?” said Celina Li, vitaminwater Group Director at The Coca-Cola Company. “Throughout the vitaminwater #beatryathlete contest, we’ll be alongside consumers as they ask themselves that question and take the opportunity to see and enjoy new adventures in life.”

Leading by example as the brand’s official U.S. Olympic athlete and campaign spokesperson will be Megan Rapinoe, a London 2012 gold medal-winning soccer player for the U.S. Women’s National Team and self-professed tryathlete. “I’m excited to partner with vitaminwater on the #beatryathlete contest because I’m definitely a ‘try’ person,” said Rapinoe. “I love to try new things and always challenge myself to enjoy new experiences, places and anything outside the norm.”

To get involved in the program, tryathletes must follow @vitaminwater on Instagram or Twitter. For prize consideration, contestants must post a photo or video of themselves trying something new by using the program hashtag or by registering their “try” at beatryathlete.com.

Tryathlete contest entries will be judged for creativity, originality, quality of submission and fit within the theme of trying something new. Entries must be submitted no later than midnight Eastern time on August 21, 2016. Each entrant is limited to one submission per day.

you could win a trip to rio in 2017 when you enter the #beatryathletecontest. rules: https://t.co/sPD5dmuwb6https://t.co/HKiZiMsDSo

Vitaminwater Recruits “Tryathletes” for Social Media Challenge added by on July 8, 2016
View all posts by →