By Newsroom on March 15, 2017Comments Off on Vocation Brews up Stunning New Craft Lager Range Designed by Robot Food 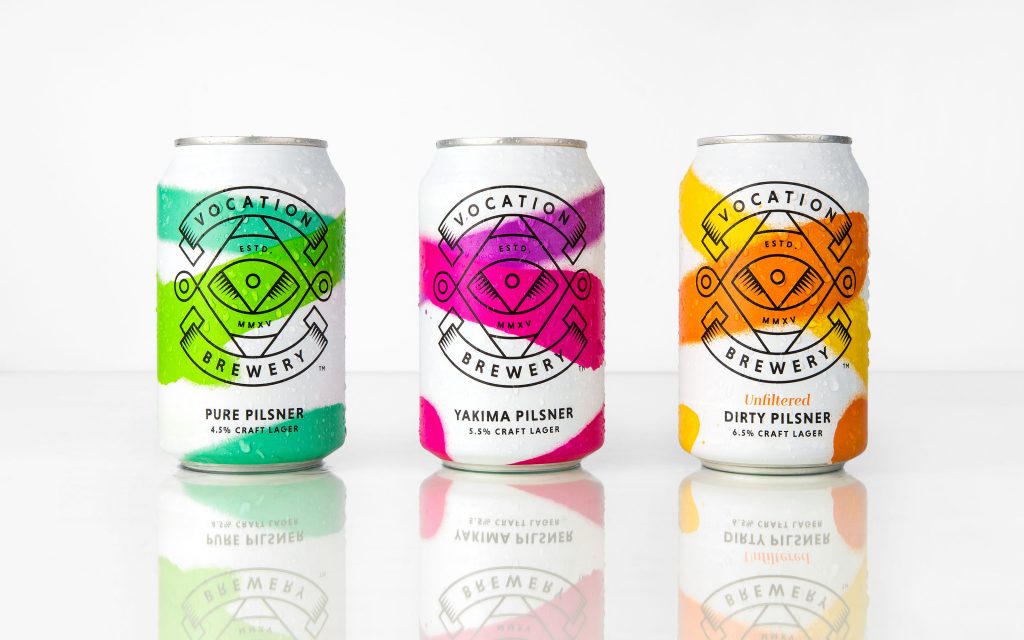 Vocation is a pioneering craft brewery whose bold, distinctive beers enjoy huge success in retailers, bars and restaurants UK-wide, and beyond. With their place in the craft beer market firmly established, Vocation asked Robot Food back to design their new craft lager range. 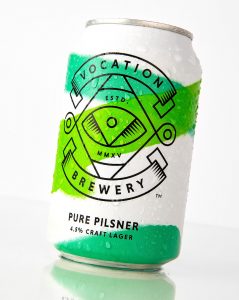 Lager has been out of the spotlight for a while due to the raised interest in specialist and craft ales, but discerning beer drinkers are beginning to appreciate the subtle complexities of pilsner, and the care and attention needed to brew a good one.

Having positioned, named and created the Vocation brand and original line-up in 2015, Robot Food took the same ‘rebellious and irreverent’ approach for the lager, choosing ‘crisp and fresh’ as their design strategy. Against a clean white background which captures the lager’s fresh flavours, the team added bright neon flashes of spray can paint. These slashes of vibrancy encapsulate the brand’s distinctive character and also differentiate the three inaugural SKUs – Pure Pilsner, Yakima Pilsner and Dirty Pilsner.

The bold designs, colourways and punchy tone of voice work together to express Vocation’s dynamism and self-confidence with delicious clarity, while the Vocation logo takes centre-stage for a louder, prouder brand expression. The new range is a perfect complement to the beer range’s dark, soulful intricacy, and launches in top-tier bars and beer shops and retailers from late March.

Founder and Hear Brewer of Vocation, John Hickling said, “Interest in quality lager is on the rise and we’ve always been at the forefront of craft brewing, focusing on beers we want to drink. A lot of people don’t realise that lager is actually much harder to brew than many other styles of beer due to the process and flavour subtleties. Once we’d perfected our flavour profiles, I was straight on the phone to Robot Food to help expand the brand, and take Vocation to the next level.”

Mike Johns, Senior designer at Robot Food, said, “Vocation is one of the brands we’re most proud of, having helped it from an idea to huge success in a very short time. The design of the new lager range stands in stark contrast to Vocation’s other beers, while sharing the same confidence and category standout.”