By Newsroom on November 13, 2018Comments Off on Walkers and AMV BBDO Want to Know if You’re #SproutLovers or #SproutHaters

To launch the new Walkers ‘Festive Flavours’ range, AMV BBDO have created a 20-second film, directed by Knucklehead’s Ben Gregor, to put the people of Britain’s festive palates to the test.

In Britain, some people love sprouts. So, Walkers have released Brussels sprout-flavoured crisps for all those avid fans. But, no need to worry if you’re a sprout-hater, they have also released four other delicious festive flavours including Pigs in Blankets and Turkey and Stuffing. 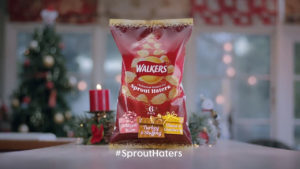 The film opens on the hustle and bustle of a family kitchen at Christmas and it’s all focused around Brussels Sprouts. Grandpa’s washing them, Mum’s criss-crossing them – a family of real sprout-lovers! However, the teenage daughter on the end is craftily slipping all the sprouts into a welly on the floor next to the table – she’s clearly not such a big fan of the festive vegetable…

We then cut to a boy nipping out the back door mid-Christmas dinner, trudging into the snow with a tennis racket. He unfurls a napkin he has hidden under his jacket to reveal the Brussels Sprouts from his Christmas meal. He grimaces, gives a whistle, and smacks them over the fence. Meanwhile, his next-door neighbour, clearly savvy to this Christmas tradition, waits on the other side of the fence catching the sprouts and guzzling them with glee. 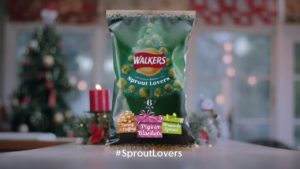 This idea of asking the nation whether they are #SproutLovers or #SproutHaters will then be amplified through an exciting digital campaign, bringing to life the individual personalities of each of the flavours.

Andy Hawkswell, Marketing Manager at Walkers, comments: “This year, Walkers wanted to bring some magic to Christmas and spark debate across the nation. The new flavours have already got the nation talking, and the sprout-filled TV campaign will further fuel that debate, with the use of #SproutLover and #SproutHater. Not only will these new flavours drive debate up and down the nation, they taste great too – yes, even the Sprouts!”

Walkers and AMV BBDO Want to Know if You’re #SproutLovers or #SproutHaters added by Newsroom on November 13, 2018
View all posts by Newsroom →