By Newsroom on January 31, 2017Comments Off on Wendy’s Unveils Its First Super Bowl Ad in 50 Years

Wendy’s will make its Super Bowl debut with a 30-second ad from VML that satirizes competitors’ use of frozen beef patties and touts Wendy’s fresh beef.

Scored to Foreigner’s 1977 hit “Cold as Ice,” the ad shows an employee from fictional burger chain competitor “Othr Guyz” using a blow dryer to thaw out some patties stored in a massive freezer.

As part of the campaign, Wendy’s is also driving fans to an Othr Guyz site, where they can view another, nearly two-minute video that parodies infomercials.

That one shows an Othr Guyz’ “Freezy Diskz” frozen patties being used as hockey pucks, doorstops, frozen coasters, table-levelers and other uses — versus Wendy’s’ “hot and juicy burgers, made with fresh, never-frozen beef, that are only good for eating and enjoying.” 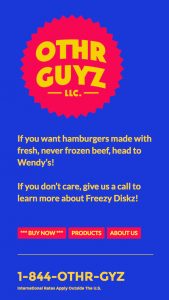 The site also offers bogus options for online-ordering Freezy Diskz, and an 800 number to “learn more” about Freezy Diskz.

According to Wendy’s, the company realized it had work to do on the never-frozen messaging front after a brand exchange earlier this month with a Twitter user who questioned that claim.

Now, Wendy’s is saying that the Super Bowl spot was inspired by that episode and its own research, which shows that seven out of 10 consumers don’t believe that Wendy’s serves fresh beef.

The brand also reports that the Big Game TV spot is just the start of its mission to change minds on this score — and that Wendy’s messaging will be seen in many “new and exciting spaces” during 2017.

Wendy’s Unveils Its First Super Bowl Ad in 50 Years added by Newsroom on January 31, 2017
View all posts by Newsroom →