By Newsroom on March 13, 2013Comments Off on Wrigley Launches Caffeinated Chewing Gum 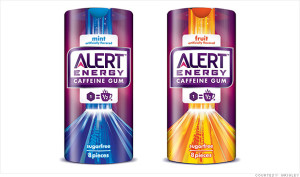 One of the world’s largest chewing gum companies, Wrigley, has added some ‘oomph’ into its products—as an alternative to traditional caffeinated beverages, such as coffee, tea and energy drinks.

The gum called ‘Alert Energy Caffeine Gum’ contains 40 milligrams of caffeine, about half the caffeine content found in a small cup of coffee.

Described as an “energy solution that gives consumers the power to control how much caffeine they get”, the gum for adults is sugar free and come in two flavors: fruit or mint.

Aimed at consumers aged 25-49, Wrigley’s new Alert Energy Caffeine Gum is targeting those who might have dropped the gum-chewing habit of their younger years, while tapping into the rapidly growing energy products market.

Growing gum sales has been a major focus for the company in recent years as other products including energy drinks take up shelf space. Some other gum makers have launched their own caffeinated products.

Alert Energy Caffeine Gum will be sold at convenience stores, and food and drug retailers in packs of eight pieces and will launch next month.

“Wrigley is focused on restoring gum category healthy, and that means creating functional and ‘occasion-based’ reasons to chew, bringin relevance back to gum,” the company said in a statement.