By Newsroom on July 8, 2016Comments Off on 180 Amsterdam & Amstel Russia Champion Friendship & Beer in New Ad

Beer brand Amstel goes back to its roots with Pass It On, a new 60-second TVC created for the Russian market by 180 Amsterdam.

The TVC represents the start of the Serious About Beer and Friendship campaign, celebrating the spirit of friendship, which has existed ever since the beer was created by two friends in 1870. It is the first major piece of work for Heineken Russia to be created by 180 Amsterdam since winning the business in a competitive pitch, in late 2015.

180 Amsterdam was tasked with repositioning the Amstel brand as a premium European beer whose drinkers are a little more mature in their life choices, their friendships and their choice of tipple. 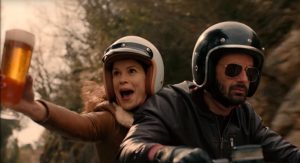 Pass It On is set in a timeless European village, rich in characters, humanity and charm. It depicts a group of friends ordering an Amstel for their absent friend and passing it along to him, via a chain of assorted townspeople on foot, bike, car, truck and boat.

The film was shot by award-winning director Bjoern Ruehmann (Blink Productions) and will break across Russia from this month.

Al Moseley, President & CCO, 180 Amsterdam, commented: “This is the sort of project that 180 Amsterdam loves. Getting under the skin of our audience with extensive research into the importance of friendship within Russian culture and turning that into a beautiful and charming campaign that elevates the brand to a new level.”

Jonnie Cahill, Marketing Director, Heineken Russia, added: “Amstel – being a brand that was founded by two friends – gave us the authority to speak to our consumer about such an relevant cultural theme. This campaign is an important step in really bringing the colourful and authentic history of Amstel to life”