By Newsroom on October 8, 2013Comments Off on Absolute Celebrates Originality With New Limited Edition Bottles

Absolut Originality – Behind the scenes

This October, Absolut is launching the next instalment in the brand’s iconic limited edition bottle collection, Absolut Originality. Building on its creative heritage, each bottle of Absolut Originality is a one – of – a – kind work of art; each of the four million bottles has an individual design created by adding a drop of ‘Absolut’ cobalt blue to the glass bottle.

Absolut Originality is now available across the on and off – trade with an RRP of £18.35.

Following the success of Absolut Unique last year, Absolut has extended the one – of – a – kind concept to truly celebrate the creativity and quality of the brand, while reaffirming the iconic Absolut cobalt blue colour. The new cutting – edge design has been created by releasing a drop of cobalt blue into the glass, which is added just as the molten glass goes into the mould at 1100°C. At that temperature, the cobalt is invisible, but as the glass cools off, a beautiful and unique blue infusion appears inside the glass of each bottle in a truly original way. 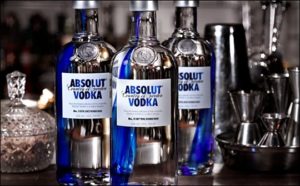 Pernod Ricard UK is supporting the launch of Absolut Originality with a raft of marketing activity including an outdoor advertising campaign throughout London; digital activity where consumers are able to add their own drop of Originality to the bottle through a socially powered production line at a new website; social takeovers of the Absolut channels; and a PR collaboration with emerging fashion designer Kitty Joseph, who has created an original, three piece capsule collection and accessories inspired by the new limited edition bottle, with a limited number being available at Selfridges online. To celebrate the release, Absolut is also working closely with the on – and off – trade to create bespoke and tailored activity, which will run throughout October.

Off-trade support includes in-store POS for the grocery and impulse channels including a ‘win your dream holiday’ neck tag where consumers can add their own drop of originality to a dream holiday, in-store sampling for the grocery channel, outdoor posters for impulse, and POS kits for the independent channel.

Tailored activity for the on-trade includes an Absolut Originality chemistry kit for bars to encourage their customers to get involved and be inspired by the new bottle. Using apparatus such as measuring beakers and pipettes, consumers can add a drop of cobalt blue to their drink to create their own unique Originality effect. As well as this, 250,000 pipettes will be distributed to the trade along with specially produced cobalt blue liqueur, allowing consumers to add their drop of Originality to their favourite Absolut drinks.

In addition, a range of Absolut Originality cocktails, that raise the bar for cutting-edge mixology, have been developed. Furthermore, a partnership with B@1 bars across London will involve a tour of the Absolut Originality Instagram printer, which will encourage consumers to take pictures of their cocktail creations and moments of Originality in bar, post them online using #addyourowndrop, and print them live in the B@1 venue they are in.

“Absolut is renowned for its innovative approach to limited editions and Absolut Originality is no exception. This new limited edition celebrates the original cobalt blue colour that has such a strong association with our brand, playing back into our creative roots”, says Adam Boita, Marketing Controller for Pernod Ricard UK. “Consumers love our limited editions, and we have developed a raft of solutions for the on – and off – trade, which will support the launch and ensure that our loyal fans will once again be proud to add our latest limited edition to their collection.”