Age of Discovery Cocktail Now Available at the Beaufort Bar

By Newsroom on October 21, 2016Comments Off on Age of Discovery Cocktail Now Available at the Beaufort Bar

The highly anticipated Age of Discovery, a specially created, barrel aged cocktail is now available as an exclusive serve or by the bottle at The Savoy’s Beaufort Bar. Having travelled the globe on board Cunard’s flagship Queen Mary 2, the cocktail has now returned to The Savoy, a Fairmont Managed Hotel, where it was mixed, sealed and bonded for its world voyage many months ago. 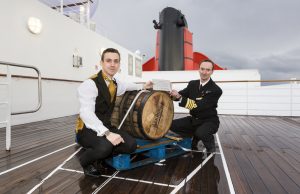 With only 700 serves available, guests can order Age of Discovery at the Beaufort Bar as an exclusive explorative serve; inspired by the incredible, vast journey the cocktail has taken. The drink, priced at £90, is served in a custom-made glass with a magnified base, atop a map board which shows the journey and temperatures the barrel went thought during its 41, 000 nautical mile journey around the world.

Also available to take home in a bottle, the Age of Discovery blend has become the latest limited edition bottle (priced at £350) in The Savoy Collection; one of the world’s most prestigious and unique collections of one-of-a-kind spirits and liquids. Launched in 2013, The Savoy Collection was created with the support of esteemed drinks experts, Speciality Drinks, to celebrate the rare and the beautiful from the world of drinks and Age of Discovery makes a wonderful addition to this incredible collection.

The Age of Discovery cocktail itself matured in a hand chosen 300 litre, Jack Daniel’s barrel on board Queen Mary 2 during her 41, 000 nautical mile, four-month world voyage from January- May 2016. Formulated by the team at the world-famous Savoy’s Beaufort Bar, named Best International Hotel Bar 2015, the Jack Daniel’s cocktail 1 is inspired and influenced by the tastes and aromas of the continents Queen Mary 2 visited; from Europe to Asia, Africa, the Americas and Oceania.

Painstaking attention to detail and refinement has gone into the choice of ingredients to reflect both Cunard’s 176-year ocean-going heritage and the decades of history and patronage associated with The Savoy’s famous cocktail bars. Its home for the voyage, a Jack Daniel’s first fill American oak barrel, was carefully chosen by The Savoy, whose team travelled to the Jack Daniel distillery in Lynchburg, Tennessee and personally chose the barrel of Jack Daniel’s Single Barrel to be used in Age of Discovery. 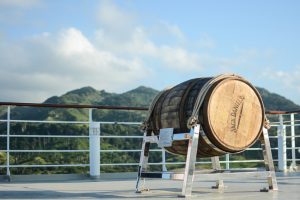 During her four-month circumnavigation, Queen Mary 2 visited 39 ports of call in 27 countries, during which time the barrel was secured in open deck space to expose it to the varied elements and climates that have influenced the fascinating final result. Prevailing temperatures, humidity and sunlight – as well as more inclement conditions – have combined to produce this truly unique barrel-aged cocktail.

Anna Sebastian from the Beaufort Bar says “The Jack Daniels and Bacardi represent the discovery of the Americas, while the Dubonnet is there as a symbol of Cunard’s royal associations. The spice-infused Madeira, used to sweeten the cocktail, is synonymous with the famous spice trail and oceanic expeditions.”

Nidal Ramini, Head of Advocacy at Jack Daniel’s added, “We have a great partnership with The Savoy and they’ve been hand-selecting their own Jack Daniel’s Single Barrel for five years. It’s great to take this partnership to another level and be involved with Age of Discovery. As the only whiskey maker in the world to craft every one of our own barrels, the idea of a barrel aged cocktail, containing the very whiskey that Daniel chose when we went to Tennessee together, travelling the world, was music to our ears.” 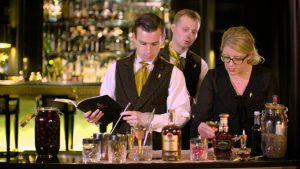 Angus Struthers, Cunard Director, says: “Cunard and The Savoy are world-renowned brands famed for their luxury and levels of service as well as the experience each is able to offers its guests. We are delighted to have worked in partnership with The Savoy to create the finest and most unique cocktail in the world on board the finest ocean liner ever built as she circumnavigated the world.”

Age of Discovery is a truly unique collaboration from three of the world’s most highly acclaimed brands; Cunard, The Savoy and Jack Daniel’s. Renowned for their traditions of service and excellence, these three brands have come together to create a world-class, world- travelled and globally one-of-a-kind cocktail. The cocktail will be exclusively available to purchase at The Savoy’s Beaufort Bar, and on board Queen Mary 2.

Age of Discovery Cocktail Now Available at the Beaufort Bar added by Newsroom on October 21, 2016
View all posts by Newsroom →