By Newsroom on November 21, 2017Comments Off on Arnott’s Launches First Christmas Film as Part of a New Campaign by TKT Sydney

Arnott’s has launched its 2017 Christmas campaign via TKT Sydney, the first Christmas film for the quintessential Aussie brand. The campaign tells a unique Christmas story and puts a modern twist on the tradition of leaving a biscuit out for Santa. 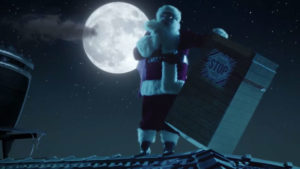 Tapping into the spirit of giving at Christmas, the film is a humorous insight into how tough it is for Santa to get through his busiest night of the year – Christmas Eve. However, a moment of connection is shared between Santa and a girl who leaves out his favourite biscuit – a moment that can be recreated by all Aussie children this Christmas.

As part of the multi-channel campaign, Arnott’s has re-branded their much-loved Scotch Finger as ‘Santa’s Biscuits’, encouraging Australian children to take part in the ritual for themselves by sharing the biscuit with Santa. The integrated campaign will run throughout the festive season across TV, digital, social, OOH and POS. 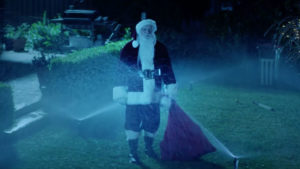 Ben Coulson, chief creative officer, TKT Sydney said: “Leaving a bicky or two out for Santa is a lovely Christmas ritual, and strangely one Arnott’s hadn’t talked about before. In their first Christmas ad, we wanted to do it justice. For an old fella, Santa works pretty hard on Christmas eve, so a bicky might just make his night.”

Nik Scotcher, marketing director: treating, Arnott’s added: “We have transformed the much-loved Scotch Finger into something fun and festive for Christmas. Our snappable Santa’s Biscuits have been created so Aussies can share an Arnott’s classic with Santa during the season of goodwill and, of course, enjoy the remaining half all to themselves.” 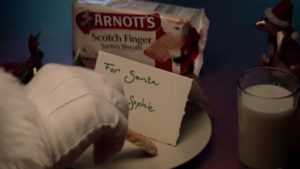 Earlier in 2017, Arnott’s launched its new brand purpose, reminding Australians about the importance of moments of real connection. This work is the latest instalment of this approach, and comes at a time when Australians come together to celebrate the holidays (and share a biscuit). 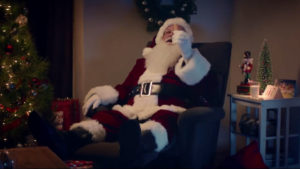 Arnott’s Launches First Christmas Film as Part of a New Campaign by TKT Sydney added by Newsroom on November 21, 2017
View all posts by Newsroom →