By Newsroom on December 1, 2016Comments Off on Asahi Super Dry Continues Search for Beer Perfection in Latest Film

TBWA, Auckland has launched a new film in support of Asahi Super Dry, the number one beer in Japan.

Andy Havill, category manager – New Zealand beer and cider, Independent Liquor said: “Asahi Super Dry is a beer with perfection at its heart and this is a playful take on the serious science that goes into our product.” 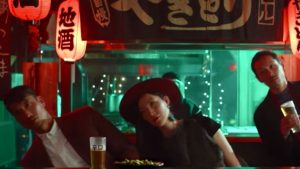 Originally developed as a result of a 5000 person survey in the Japan, Asahi pioneered a new direction for beer in Japan and the world, inspiring many imitations in its wake.

Christy Peacock, ECD, TBWA, Auckland added: “Asahi is dedicated to perfection. In fact, they believe so strongly that their beer is as close to perfection as a beer can be, they are now focusing on other ways that the drinking experience can be improved on. Like calibrating bar robots to pour their beer at the precise angle. It’s a quintessentially Japanese respect for precision and devotion to the art of beer drinking.”

The spot features beer drinkers who are similarly devoted in this belief. It’s a love letter to beer, captured on film.