By Newsroom on November 9, 2018Comments Off on Asahi Super Dry Launches a Surreal New World in Latest Campaign by The Monkeys

In a category often diluted with stories of mateship, Asahi Super Dry needed to create a new wave of energy to break through to premium beer drinkers in its latest campaign, ‘Enter Asahi’.

In collaboration with both Asahi Beverages in Australia and Asahi Breweries in Japan, The Monkeys, part of Accenture Interactive, created the campaign. Leveraging the brand’s Japanese provenance in ways that feel authentic but more importantly, interesting, surprising and mysterious, ‘Enter Asahi’ aims to tap in to consumers’ appreciation for discovery and exploration.

Directed by Marco Prestini from In The Thicket, the film takes audiences on a journey where imagination is not bound by reality. A world of giant squids, robot geisha, fierce warriors and loyal salary men. 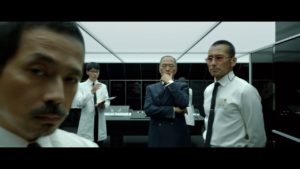 The campaign will roll out internationally across broadcast, cinema, OOH advertising, digital, press, path to purchase and on Asahi’s social channels.

Ant Keogh, chief creative officer, The Monkeys Melbourne said: “Japan is an exciting and enigmatic place where the traditional and technological collide. This was our inspiration for the ‘world of Asahi’. We avoided a traditional narrative, and took a more surreal, music-video inspired approach. The loose ‘story’ leads to a mysterious Japanese character who collects giant squid and owns a secret research facility dedicated to pruning the perfect Bonsai tree. The idea being that kind of perfectionist would favour precision-brewed Asahi. Having said all that, if people think the ad is cool, Japanese and remember it’s for Asahi, then we’ve probably done our job.”

Michael Vousden, marketing manager – beer, Asahi Premium Beverages added: “We are very excited to build our foundations for the future and evolve the Asahi Super Dry brand platform and creative proposition into a compelling ‘Enter Asahi’ campaign. The creative impact will cut through to our target and will help recruit the next generation of Asahi Super Dry drinkers in Australia.”

Asahi Super Dry Launches a Surreal New World in Latest Campaign by The Monkeys added by Newsroom on November 9, 2018
View all posts by Newsroom →