By Newsroom on May 30, 2014Comments Off on Batemans Relaunches England Expects Celebratory Beer in Time for World Cup 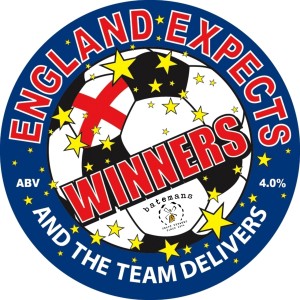 Batemans, the family brewer based in Lincolnshire, is relaunching its England Expects celebratory beer in time for the World Cup, with a three-way pump clip to reflect our boys’ prowess in the tournament.

England Expects is a delicious amber beer full of succulent blackcurrant and red fruit from the Bramling Cross hops, available from now until the end of July 2014. The beer offers customers a dry lingering character and is the perfect balance of biscuity, Pilsner malt, succulent spices and subtle bitterness. With an ABV of 4.0%, it’s perfect for those who want to enjoy a patriotic beer as they watch the football.

This year, the England Expects beer, which is only available by cask, comes with a three way pump clip which can be changed as England progress through the tournament (or don’t, as the case may be…). The first pump clip, which can be displayed while England is competing in the World Cup, simply shows the name of the beer above a football with Brazilian and English colours.

The second pump clip can be displayed if (or perhaps when…) England is knocked out. This uses more sombre black and white shades, with the words ‘We’ve Blown It!’ across the top. Finally, if England manages to progress through its challenging group, and then go on to replicate the glory of 1966, there is a third pump clip, emblazoned with ‘England Expects and the Team Delivers’. This pump clip uses the national colours of red and white over a bright blue background, with a football displaying St George’s Cross.

Stuart Bateman, Managing Director of Batemans Brewery, commented: “As we prepare ourselves for another nail-biting World Cup tournament, what could be a more apt beer to enjoy than a pint of England Expects? While at Batemans we’re hoping the boys will defeat all their foes, particularly the formidable hosts Brazil and reigning champions Spain, we’ve prepared for every eventuality with our light-hearted three way pump clip.”

Batemans Relaunches England Expects Celebratory Beer in Time for World Cup added by Newsroom on May 30, 2014
View all posts by Newsroom →