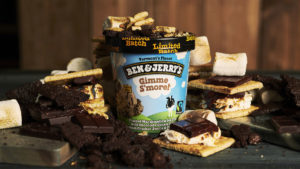 There’s just something about a s’more. Maybe it’s smooshing the graham crackers around the toasted marshmallow or wiping melting chocolate off your face after taking a big bite.

To harness the deliciousness of this campfire favourite, Ben & Jerry’s created Gimme S’more, an ice cream take on a classic dessert experience. Join Ben & Jerry’s via Facebook Live for a flame-worthy digital launch unlike any other.

“The toasted marshmallow ice cream base adds a new level and depth of flavour,” said Flavour Guru, Eric Fredette. “We’re constantly looking at how we can take our flavours to the next level and this was a great way to do just that.” Fans are sure to find this iteration indulgent!”

Gimme S’more rolls out to retailers and Scoop Shops US-wide in mid-March for an MSRP of $4.89.  To find the flavour near you, check out Ben & Jerry’s Flavour Locator. Gimme S’more will also be available online here.