BrewDog co-founders James Watt and Martin Dickie dress up as a pantomime horse and go on an outing to a local leisure centre to parody the Guinness ad, which originally featured CGI horses appearing from waves in a moodily shot film.

The BrewDog campaign marks the launch its new craft stout, Jet Black Heart, and attempts to convey the message that the brewer “cares more about the production values of its beers than its ads.” 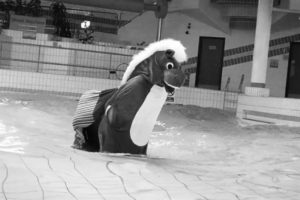 Watt said: “Big beer advertising is bollocks. If you have to spend millions of pounds on ad campaigns to get people to drink your beer, the brewing is probably being neglected. And anyway, Martin had a horse costume left over from the Christmas panto. So we thought, let’s save our money for making epic beer that tastes of something and stands for something.”

BrewDog and Diageo have an increasingly fierce rivalry, with the former accusing Diageo of underhand tactics.

Diageo apologised after admitting a “serious misjudgement” when it allegedly warned the British Institute of Innkeeping (BII) awards it would withdraw its sponsorship of the event if BrewDog won the bar operator of the year award.

The Jet Black Heart stout was developed as part of the brewer’s annual ‘prototype challenge’ that involves fans deciding what beer BrewDog should brew regularly. It is a 4.7% ABV oatmeal milk stout that aims to deliver a “darker dimension” BrewDog’s current range of beers.