By Newsroom on August 18, 2017Comments Off on Bud Light Kicks Off 2017 NFL Season With Newly Designed Team Packaging 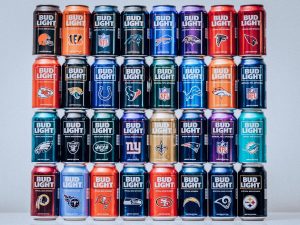 Just in time for the return of the NFL season, Bud Light, announced that it will continue its tradition of NFL team-themed packaging. During the 2017 season, America’s favourite light lager will be available in both cans and aluminum bottles specifically designed to help football fans celebrate their favourite team.

In total, there will be 28 new designs to celebrate 28 NFL teams across the country and a special 36-pack with all 32 NFL teams represented. The updated looks are already on shelves in certain markets and will be available US-wide later in August.

This year’s unique team can and aluminum bottle design prominently features each team logo as well as a catch phrase or rallying cry for each NFL franchise. Additionally, each can will feature Snapcodes that when consumers take a photo of them using Snapchat, it will unlock a chance to win Super Bowl LII tickets, an interactive Bud Bowl-style game and team-specific Snapchat filters.

“NFL team packaging has become something fans look for from Bud Light year after year,” said Anna Rogers, Director of NFL Partnerships and Strategy, Anheuser-Busch. “We are proud to continue that tradition and give fans another way to support their favourite teams while enjoying NFL football with their friends. We are also very excited to roll out NFL packaging on aluminum bottles for the first time in addition to cans.”

In addition to the team-specific packaging, Bud Light will be introducing new television advertising throughout the NFL season, as part of its ongoing Famous Among Friends campaign that celebrates the fun times made while building friendships over sports and beer.  The first commercial spot is slated to run during the season-opening game on September 7.

Bud Light’s continuation of the NFL team can tradition sets the tone for another exciting NFL season and adds another element to the brand’s rich history as the official beer sponsor of the NFL.