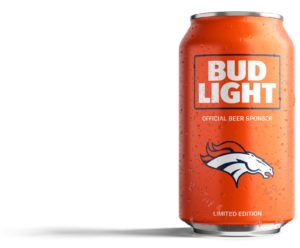 the Denver Broncos football team and shopping rewards app Ibotta partnered to deliver a free beer to fans to celebrate the start of the free agency period, when teams can recruit eligible players. The promotion, which runs through March 28, will reward the first 500 fans in Colorado that redeem the offer, according to a blog post by the sports team.

The beer brand is offering an additional rebate of 25 cents off Bud Light drafts to give fans a “quarter back” through April 26.

People can access both promotions by downloading the Ibotta app and scanning their receipts of Bud Light purchases. The redemptions are automatically deposited into the users’ accounts. The Ibotta app can be downloaded for free from the App Store and Google Play.

Bud Light’s promotion with the Denver Broncos and Ibotta comes as almost every aspect of professional football is extended into a marketing opportunity, even in the off-season, to appeal to viewers’ shifting consumption habits and attempt to deepen engagement with football fans both at games and at home on a variety of devices. The partnership also aims to promote the beverage that’s popular among sports fans. 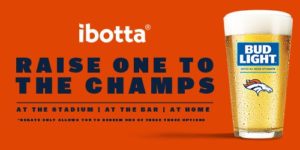 The Broncos for years have organized mobile marketing campaigns to give away game tickets and engage fans amid declining NFL viewership. Last year, the team added a bingo game to its mobile app, sponsored by Verizon Communications and Coca-Cola Zero, to offer up prizes like cash, autographed Broncos memorabilia and Coca-Cola merchandise and get fans to participate and establish team loyalty.

Ibotta has steadily grown a mobile following with 23 million downloads and a user base that spends more than $6 billion a year on the app, per Forbes. The Denver-based company gives users cash-back rewards for online and mobile purchases on Amazon, Walmart and Jet, among other sites. Ibotta also has overcome initial resistance from some brands that wanted to build their own mobile apps, but later realized that mobile customers often gravitate toward a single app that works everywhere instead of having to download and manage a separate app for every brand or store.