By Newsroom on February 15, 2016Comments Off on Budweiser Dream Goal is Back with New Judge Jamie Carragher 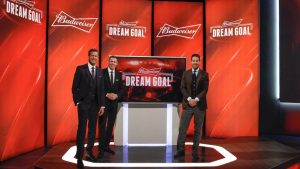 Budweiser is bringing back Dream Goal, its hunt for the greatest amateur goals from across the country. 2016 will see the addition of Liverpool FC legend Jamie Carragher to the judging panel, alongside top pundit Jamie Redknapp and broadcaster Ed Chamberlin. The trio feature in a brand new Budweiser Dream Goal launch ad celebrating the goal-scoring heroes of Sunday league football from the get-go – spotlighting one of the competition’s first screamers from 27-year-old Fernando Moke of Chapeltown Fforde Grene football club, Leeds.

Budweiser Dream Goal gives Britain’s amateur footballers a chance to live the dream – getting their goal analysed on TV by Sky Sports’ top pundits, Carragher and Redknapp. The winner will also star in Budweiser’s TV ads, as well as taking home £50k for the non-league club of their choosing.

To stand a chance of winning, entrants simply need to capture their screamer, and submit their video at www.budweiser.co.uk.

While on the website, entrants can see who they’re up against by checking out their rivals’ goals on the Dream Goal gallery.

This year, Budweiser is fulfilling its promise of championing amateur footballers from the very start, with its launch ad featuring a genuine goal submitted via a partnership with Grass Root Goals to kick off the 2016 competition – to help inspire others to get involved. The new Budweiser advert premiered on 12th February on Sky Sports, to mark the official start of this year’s competition.

The best goals will then be selected to feature in weekly ‘contender’ slots on Sky Sports during high profile matches towards the end of the season.

The winning goal will be chosen by Carragher, Redknapp and Chamberlin, and revealed on 15th May via a special, extended 90 second ad, featuring the goal and the pundits’ analysis.

Budweiser has also introduced an impressive new prize package for both the winner and runners up for 2016, including:

Winners will be able to nominate any non-league club to receive the grant, whether their own, or a local club of their choosing. 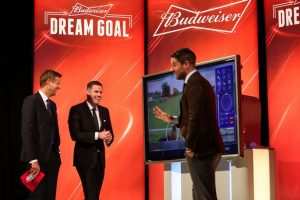 The new prize pool is part of the Budweiser Club Futures programme – a grant scheme run in partnership with The Football Association and The Football Foundation to support grassroots football across the country. In 2015, Budweiser announced a new long-term agreement with The FA, which will see the iconic brand become the Official Beer of The Emirates FA Cup until 2018.

New face of Budweiser Dream Goal, Jamie Carragher, says: “I remember talking about Dream Goal with Jamie last year, and thinking it was a brilliant idea. Everyone knows how important the grassroots are to the game, so it’s great to be part of something that is giving these guys a bit more recognition. I’ve been on the receiving end of some screamers in my time – so I’m looking forward to seeing what people have got for us!”

Laura Salway, Senior Brand Manager at Budweiser, says of the campaign: “Budweiser Dream Goal got off to a flying start last year, with over a thousand amateur goals submitted from across the country. In 2016 we wanted to pick up exactly where we left off by celebrating stand out amateur goals and featuring one of our incredible Sunday league goal submission’s in our launch ad. This year will be all about our Sunday league stars and we plan on showing as many of our submissions as possible, and giving as many as we can the star treatment they deserve.”

“We’re so excited to be back this year, with a new judge to add to our famous line-up – plus a seriously impressive prize package for our winner to continue our longstanding support of British football,” concluded Laura.

Budweiser Dream Goal is Back with New Judge Jamie Carragher added by Newsroom on February 15, 2016
View all posts by Newsroom →