By Newsroom on November 13, 2018Comments Off on Burger King Brazil Wants Opinions, Not Prejudice in Self Aware Video Featuring Social Feedback

The lines between opinion and hate speech are blurring, and Burger King Brazil is taking aim at those who would confuse the two.

A new video for Burger King compares criticism of the brand with prejudiced remarks taken from social media to bring awareness to the point that there should always be room for opinion – but not for prejudice.

The new campaign for Burger King Brazil seeks to let its consumers know that, positive or not, every opinion deserves to be fairly heard, yet, the same does not apply for prejudice. To bring this serious theme to light, the brand makes use of reverse marketing strategies to give its haters a voice. 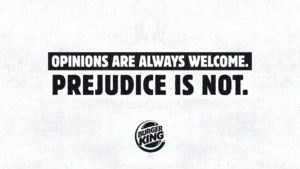 In the video, Burger King shows real social posts about how people don’t like the brand, with statements like “I really hate Burger King. The smell makes me sick.” and “Burger King is shit. I really think it’s a low quality restaurant.” The brand doesn’t mind exposing criticism about itself on social media, since they are nothing but opinions of a few people.

The campaign, created by DAVID São Paulo, then goes on to showcase user comments with various forms of discriminatory content – racial, sexual orientation and gender-based – to prove that some of the worst prejudice can be disguised as opinions.

According to surveys conducted by Ibope Inteligência, data suggests that seven out of 10 Brazilians have made at least one prejudiced comment and, of the 83% of people who claimed to hold “no prejudiced views”, 72% have actually made an offensive remark. The video closes with the message: “There should always be room for opinion – not for prejudice”.

“Today, some of the worst kind of prejudice is disguised as ‘opinion’. So, we compared negative opinions of the brand to real prejudiced comments scattered on social media. Burger King is not afraid to show what haters think about them – if it means championing tolerance and diversity,” said Rafael Donato, creative vice president at David.

This isn’t the first time Burger King has called prejudice to light. Burger King Argentina recently took a stand against those who think that redheads are bad luck.