Cadbury is All About Kindness in Relaunch Campaign for Dairy Milk

By Newsroom on January 16, 2018Comments Off on Cadbury is All About Kindness in Relaunch Campaign for Dairy Milk

Cadbury is focusing on little acts of kindness in its relaunched marketing for Dairy Milk, as revealed in the first work from VCCP since the Mondelez brand appointed it as lead global agency in 2017. The strategy behind the campaign is to take the Cadbury brand back to its roots as a family brand founded on generous principles (the original Cadbury family were Quakers and pioneers of social justice in the UK). 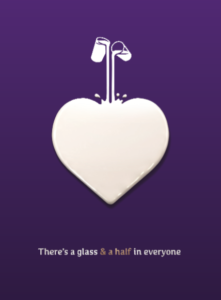 A spot, which launched on January 11, directed by Frederic Planchon of Academy, depicts a busy working mom who finishes her shift at a fish and chip restaurant, rushes to pick her young daughter up from school and then is interrupted by what seems like an important phone call as they walk home. The little girl wanders into a corner shop and decides to buy her mom a large bar of Dairy Milk.

She doesn’t have any money, so she shyly takes a few little objects from her purse to “pay,” including buttons and a tiny toy unicorn. The kindly shopkeeper raises his eyebrows but takes the “money” and gives her back the unicorn as “change,” and the girl hands the chocolate to her mom wishing her a happy birthday. The spot ends with the tagline “There’s a glass and a half in every one.”

As well as the TV work, the wider campaign will including OOH executions showing the well-known Cadbury Dairy Milk glass and a half of milk icon together with other positive symbols, such as a heart, smiley face and thumbs up.

There will also be a pop-up Cadbury Dairy milk store in London’s Greek Street, Soho from Jan 25-28 where fans will be able to exchange their own buttons and trinkets for free chocolate, with 10,000 bars being given away. 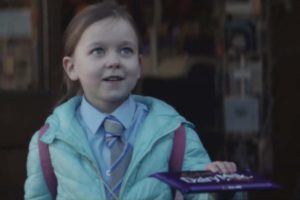 VCCP was appointed last June, replacing lead agency Fallon, which had created award-winning work for Cadbury including its drumming gorilla in 2007. That campaign was very successful, but more recent campaigns were deemed not to have worked as well, including Fallon’s Joyville work, which launched in 2012 as a long-term platform, but was dropped after two years. Mondelez acquired the Cadbury brand in 2010.

Darren Bailes, executive creative director for VCCP, says: “Our intention is to make people really feel something again for Cadbury…the feeling you get when you watch ‘A finger of Fudge is just enough’ adverts from the seventies. Warm. Homely. Fabric of the nation. Our work finds moments of generosity and goodness in a world that at first look can seem pretty selfish. There are no special effects, no fakery…just honest real life.”

Cadbury is All About Kindness in Relaunch Campaign for Dairy Milk added by Newsroom on January 16, 2018
View all posts by Newsroom →