Cadbury Rings in a #Cadvent Christmas with Yahoo Storytellers

By Newsroom on December 5, 2016Comments Off on Cadbury Rings in a #Cadvent Christmas with Yahoo Storytellers 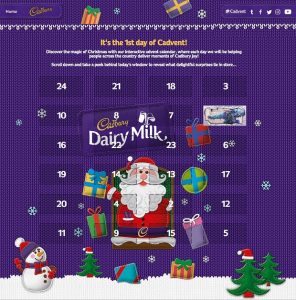 Cadbury is joining forces with content studio Yahoo Storytellers to launch a content marketing campaign across Yahoo and Tumblr on 1st December to drive digital engagement for its #Cadvent Christmas campaign.

Cadbury’s #Cadvent campaign, which returns for a second year, will lead with TV and digital via an exclusive partnership with Yahoo and Tumblr. The campaign will also include advertising airtime on Global Radio, promoting daily Christmas themes and driving listeners through to the Cadvent.co.uk page on Tumblr.

Tapping into the popularity of Christmas on Tumblr, which last year saw nearly 25M Christmas themed posts, #Cadvent is Cadbury’s debut campaign on Tumblr. The partnership was negotiated between Yahoo and Cadbury’s partnership specific agency The Story Lab, with all video content being produced by creative agency, Fallon.

Yahoo Storytellers have designed a beautiful digital advent calendar on a dedicated #Cadvent page on Tumblr, complete with opening windows and foil for the days that have passed. A new piece of specially created video content will be revealed on the page every advent day leading up to Christmas.

To support the video content and increase engagement, Yahoo Storytellers will remix the videos to create 24 corresponding GIFs, which will be promoted using Tumblr Sponsored Posts. Each day will have a specific theme associated with the joys of Christmas, from carols to crackers and snow to skating.

In addition to Tumblr activity, there will also be 24 sponsored articles published across Yahoo’s editorial properties in the run-up to Christmas. Each one will cover a key yuletide topic or trend, from decorations to recipes and traditions from around the world, and will be produced in association with Cadbury.

The articles will be distributed using the Yahoo Gemini native advertising platform – in addition to organic editorial promotion on Yahoo properties – helping to ensure the content is seen by an engaged audience, at scale, and reaches the right people at the right time.

Edward Desbois, head of strategic solutions at Yahoo Storytellers, commented: “The build up to Christmas is one of our favourite times of year, and we loved watching the #Cadvent campaign unfold last year. We’re incredibly excited that Yahoo Storytellers will be helping to bring the festive fun to a much wider audience in 2016. Through engaging videos, entertaining GIFs and creative written content, we’ll reach a digitally-savvy community and spread Cadbury’s Christmas spirit online, creating excitement and anticipation up until the big day.”

Cadbury Rings in a #Cadvent Christmas with Yahoo Storytellers added by Newsroom on December 5, 2016
View all posts by Newsroom →