By Newsroom on June 24, 2015Comments Off on Carling Launches £3.6M Football Campaign In The UK 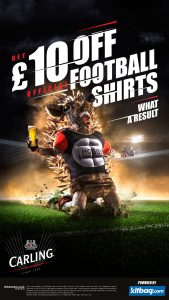 Carling is launching a £3.6M campaign, which aims to ignite football fans’ passion by getting them ready for the season ahead.

Running during the period between the football season ending in May and restarting in August, Carling will be supporting football fans with a £10 off official football shirts promotion. The promotion will run across selected packs in stores nationwide and pubs and bars throughout the UK.

The campaign will also be supported by through the line activity including out of home (OOH) and new TV advertising featuring the Carling duo, Dylan and Jon. This will further be brought to life by high profile experiential activity featuring former Premier League and England football star, Jimmy Bullard to launch a nationwide ‘Shirt Amnesty’. During the summer transfer window, Jimmy will give fans the opportunity to trade in a football shirt with the name of a recently sold player on the back for a new one, at no cost for the fan. 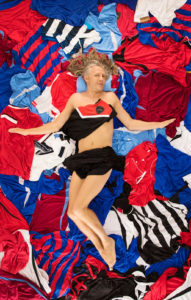 To launch the campaign, Carling has recreated an iconic image from American Beauty, which sees Jimmy Bullard laying on a bed of hundreds of football shirts, with his famous locks flowing.

Jim Shearer, Carling Brand Director at Molson Coors, says: “This new campaign targets a unique time of the year where, uninhibited by their team’s actual performance, fans have renewed hope, dreams and aspirations about the prospects of the season ahead. In what promises to be a summer transfer window full of activity, Carling will be doing its bit to get fans ready for the season ahead, as excitement and anticipation builds.”

The campaign is the second in a series from Carling around key British moments that matter most. The first, Carling’s ‘Brighton or Barbados’ campaign, gave 1,000 consumers the chance to experience the bank-holiday of a lifetime for just £49.

The advertising campaign creative was created by Creature, and is being supported through below the line developed by LIFE and Experiential from Cake. Zenith Optimedia will be handling media strategy and placement across the campaign.

Carling Launches £3.6M Football Campaign In The UK added by Newsroom on June 24, 2015
View all posts by Newsroom →