By Newsroom on March 24, 2016Comments Off on Carlsberg Gears up for Trophy Tour & ‘Substitution’ Stunts for Euro 2016 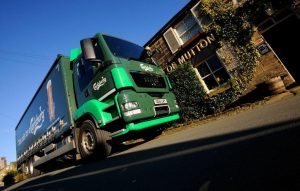 Carlsberg has revealed its UK sponsorship of the Uefa Euro 2016 will be activated under the banner of ‘If Carlsberg Did Substitutions’ and feature a trophy tour, series of stunts, TV idents and out of home activity.

The beer brand will be touring the Henri Delaunay trophy across England and Wales on 28-30 March. The silverware will land in the likes of Cardiff City Centre, the Chase Inn Pub in Staffordshire and Wembley Way in London, with the likes of Teddy Sheringham and Ian Rush making appearances at the events.

The brewer will also be ‘substituting’ well-known pub signs with patriotic alternatives across the country. Boozers such as the commonplace Red Lion will be renamed as The Three Lions, for instance.

Additionally, a series of under-wraps stunts have been planned to help football fans ‘substitute the ordinary for the extraordinary in everyday situations’, and win tickets to watch matches in France.

The stunts, which have been devised by Carlsberg’s content-led ‘newsroom’ of agencies, will be filmed and then amplified across a number of digital and influencer channels. The brand will also invest in a four-week, 1,500 panel out of home campaign, as well as TV idents shown during every England game, the semi-final and final.

Carlsberg is also pushing publicans to get involved in the sponsorship. A total of 10,000 point of sale kits will be available to pubs in England, Wales and Scotland, with assets to include fixture posters, planners, flags and wigs to help add to the consumer buzz surrounding games.

David Scott, director of brands and insight at Carlsberg UK, said: “Uefa Euro 2016 is a huge opportunity for pubs. Football tournaments are worth more than £60m to the on-trade and live football can add an uplift of 60 per cent to an outlet’s rate of sale. We recognise the importance of this opportunity and we’re investing heavily to help our customers encourage football fans off their sofas and into the pub.”

Carlsberg Gears up for Trophy Tour & ‘Substitution’ Stunts for Euro 2016 added by Newsroom on March 24, 2016
View all posts by Newsroom →