By Newsroom on March 30, 2017Comments Off on Chrissy Teigen Plays a Coconut ‘Plant Manager’ in New Vita Coco Spot

As a mother, supermodel, TV personality, social-media phenom and wife of musician John Legend, Chrissy Teigen doesn’t exactly need another job—let alone one as a plant manager. But that’s what Teigen is now.

At least, that’s what she is in a new spot for Vita Coco. 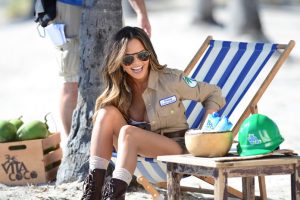 Shot on a white-sand beach at Key Biscayne, Florida, the spot below shows Teigen wearing an unbuttoned brown custodial uniform and lounging beneath a coconut tree. A voiceover explains that a plant manager’s central job is to “keep track of your employees … make sure they’re producing.” When one of the coconuts falls from the tree, Teigen pats the trunk approvingly and praises it as “employee of the month.”

The conceit here is that the Vita Coco’s “plant” is simply a tree on a tropical island. As for the plant manager, she’s got a pretty chill job. Sardonic humor aside, the underlying brand message here is both serious and succinct: Vita Coco’s coconut water is water from a coconut.

The spot “is just being [as] honest as the product is—we’re not trying to trump it up,” said Chris Sojka, co-founder and CCO of Madwell, the creative shop behind the spot, which scouted beaches all over the tropics before settling on this one. It’s a bit of stagecraft, since Vita Coco’s coconuts actually come from all over the world. In the end, Sojka settled on this “idealized beach” just south of Miami, since it had “the right vibe.”

The TV campaign breaks on April 4 and will air on major networks including NBC, CBS, AMC and Bravo.

This isn’t the first time Teigen has sung the praises of Vita Coco. Last summer, she shot a series of amusing videos on Snapchat, demonstrating the array of uses of the brand’s coconut oil. In the videos, Teigen fries eggs with the oil, spreads it on toast, shaves her legs with it, gives her new baby Luna a toe rubdown with it, uses it as a lip balm and—most memorably—appears in a pool with a coconuts filter in place of her bikini top. “Vita Coco sent me 862 jars of coconut oil—and one sexy bikini,” Teigen said.

The experience of working with Teigen on the Snapchat videos, said Vita Coco’s vice president of marketing Charles van Es, “was fun. She is so easygoing and she completely got everything.” It made the model a natural candidate for the current, more ambitious campaign. 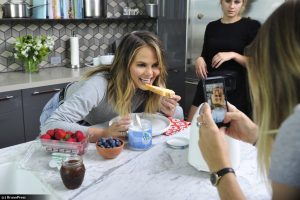 Nevertheless, Sojka said, the spot was conceived and written before the brand approached Teigen officially. “We wanted to create an iconic character—the plant manager—someone who could be in commercials in the future and across channels,” he said.

It seemed pretty clear from the start, though, that Teigen was a natural fit, and probably the only real choice for the creative being planned. “We kept circling back to how Teigen is a perfect mixture of the self-effacing human, aspirational beauty, health and fitness,” Sojka said.

Any brand with deep enough pockets can hire a celebrity to hawk a product, but the art of a credible endorsement rests on a delicate balance of plausibility and authenticity: A feeling that the star in question actually uses the product, in addition to having a personality that dovetails with what it represents. Van Es believes that Teigen checks off all of those boxes.

“She’s perfect for the brand,” he said. As a product, Vita Coco positions itself as credible, natural, likeable and free of pretension—all qualities that Teigen already has. “She’s a mother and a chef and a Sports Illustrated model. She’s very funny and doesn’t take herself too seriously,” van Es added. “When people see her on the beach with a Vita Coco, they’ll believe, hopefully, that these are the things she’d be saying. We feel good about this.” 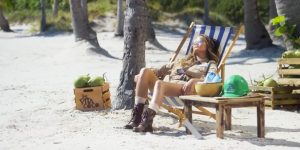 Vita Coco also feels good about the category its in, which by all indicators is ripe for growth. According to Mintel’s 2016 report on juice and juice drinks, “coconut water has exploded in profile in the global beverages market, and it has been one of the big business successes of the past decade.”

Neither Mintel nor IRI track coconut water as a category, but van Es estimates that it’s worth $1.5 billion domestically, and has a global market that’s bigger still. It’s one reason why, after years of grassroots marketing like handing out samples on the street and at music festivals, Vita Coco felt it was time to take the next step in its marketing evolution.

“We think this is the moment to really get a lot more awareness for the brand,” he said. “That’s how we got to doing TV.”