By Newsroom on September 24, 2015Comments Off on Cinnamon Toast Crunch Introduce The Selfie Spoon

Breakfast may be the most important meal of the day, but it shouldn’t stand in the way of taking a daily selfie.

In a wacky marketing move, General Mills‘ Cinnamon Toast Crunch and agency McCann have invented a “selfie spoon,” which is exactly what it sounds like—a purple spoon attached to a 30-inch selfie stick.

The idea capitalizes on the craze that’s taken over social media. “Everyone loves a bowl of Cinnamon Toast Crunch, but if you don’t post it on social media, did it really happen?” asks a video ad for the campaign. 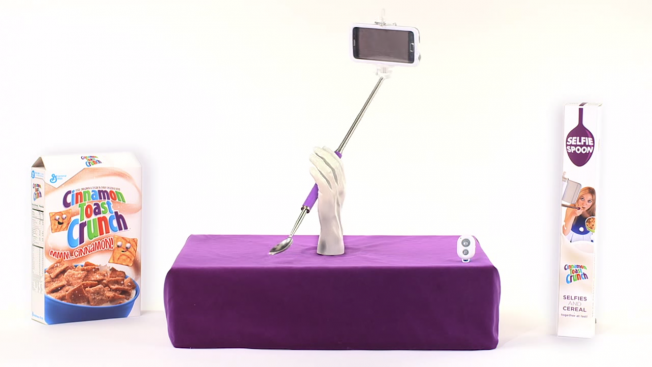 Cinnamon Toast Crunch is giving out 1,000 spoons over 10 days as part of its “Cinnamilk” campaign. So far, about 530 have been sent out, per a rep for the brand.

The gimmick is free, but consumers pay for shipping and handling.