By Newsroom on February 16, 2017Comments Off on Co-op Launches #JoinUs Campaign by Leo Burnett London

The Co-op have launched a new TV advert which promotes the ethical way the business sources its food and its membership scheme, encouraging consumers to join.

This 30 second advert brings to life the Co-op way, telling a food quality story which champions its Fairtrade heritage and British sourcing. 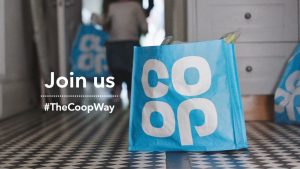 The ad highlights the Co-op’s membership scheme and its reward to shoppers and communities, highlighting how, ‘Every mouthful of Co-op food earns members 5% back and 1% back for their community.’

Jemima Bird, Customer Director, Co-op, said: “The advert highlights what makes Co-op special, which is our great food, sourced in an ethical way and which now gives back to the local community where it’s bought. The new membership offer is raising money for local causes and giving back to our members’ own pockets too. It’s now time for all of our customers to join us!”

The campaign by Leo Burnett London, includes outdoor advertising, press, online, social and in store elements which further explain the membership scheme whereby members get 5% back on Co-op products purchases and 1% is given to support their local communities.