Coca-Cola Australia has announced the launch of its newest campaign – ‘Coke’s Epic Summer’.

The campaign by Ogilvy Sydney, is aimed at inspiring and enabling Australian teens to make their own summer “epic” with Coca-Cola at the heart of their memorable experiences throughout the season.

Further building the connection between Coke and summer, the campaign will be driven by a new TVC that will air during high profile programs including My Kitchen Rules, the Big Bash League and the Australian Open, as well as on key teen channels including MTV and Channel V. Online video content will feature across a number of the most watched teen digital properties including YouTube, Vimeo and Spotify.

The ‘Coke’s Epic Summer’ campaign aims to reach teens in high-frequency summer hotspots – including cinemas, parks and beaches – and enhance their fun across a range of locations including Byron Bay, Gold Coast, Brisbane and Sydney, as well as backyard house parties. This will be activated through impactful out-of-home formats and a prize mechanic featuring “Tear, Wear & Win” labels on packs.  As their name suggests, the call to action for consumers is to tear off the label and wear it as a wristband for their chance to win a range of “epic” summer prizes. 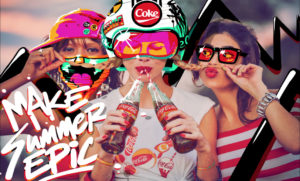 Other key elements of the multi-million dollar campaign include a special launch pontoon party at Milk Beach, weekly social videos, PR, point-of-sale and influencer marketing. Coca-Cola’s iconic Kings Cross billboard will be used in a fun and cheeky way, with a traditional Coke image edited by a young Australian street artist, with their own artistic spin.

Coca-Cola has also teamed up with Pedestrian TV to help launch its youth focused site ‘PEZ‘. The timing of the launch of the new site is aligned with the Coke’s Epic Summer campaign with Coke running a three month exclusive sponsorship.

Marina Rocha, spokeswomen, Coca-Cola Australia said: “Coke has become synonymous with summer and every year we continue to evolve our dialogue with our consumers and provide new experiences they can enjoy. We know teens will be out and about enjoying the weather in the coming months, so with our latest campaign we hope to inspire them to have an even more epic summer by enjoying  a refreshing ice cold Coke and be in for a chance to win a load of epic prizes.”