By Newsroom on July 12, 2017Comments Off on Coca-Cola Thinks Smart with AI-Equipped Vending Machine 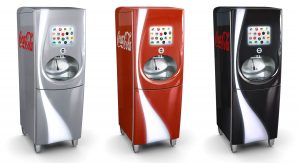 Beverage giant Coca-Cola is giving the world’s dumb vending machines an AI-powered makeover in a bid to banish jammed change slots, broken dispensers and other malfunctions to the dim and distant past.

Going way beyond a colourful touchscreen, Coca-Cola harbours visions of infusing the humourless lumps of metal, electronics and glass with a personality – making the process of acquiring a Coke can ‘fun’ by creating a compatible bot to live on your smartphone.

Outlining how this might come about in the next generation of machines Lauren Kunze, chief executive of Pandorabots, said: “Bots help brands reach customers on the channels that they prefer, enabling personalised, two-way communication at scale. This is especially valuable for consumer packaged goods companies and other verticals where third-party distribution channels mean that, historically, the brand does not have a direct line of communication with their customers.” 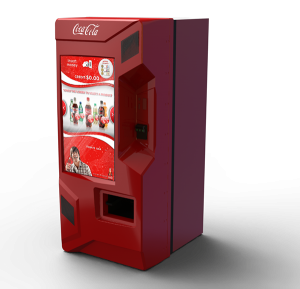 In addition to pepping up what is a mundane experience, Coca-Cola is also mindful of data such approaches can provide, as Kunze observed: “Vending and sampling are two examples of previously anonymous, transient transactions that, when combined with a messaging interface, allow the brand to gather user feedback and track data, like individual purchase history and preferences, to remarket and personalize offers. I expect QR codes, particularly at POS systems and in print and television ads, to be especially powerful in bridging offline to online and opening a persistent thread.”

Coca-Cola will debut its new vending machine apps over the next fortnight at select locations in the US, Australia and New Zealand – allowing customers to order multiple drinks ahead of time ready for collection.

This wouldn’t be the first time Coca-Cola has repurposed the humble vending machine, having unveiled a quirky set of ‘reverse’ vending machines at the start of the year to encourage gifting.