By Newsroom on November 20, 2018Comments Off on Coca-Cola’s Polar Bears, Now 25 Years Old, Return to Share Their Rules for a Loving Household

If you want to feel old, drink in the fact that Coca-Cola’s beloved polar bears are now 25 years old. In a 45-second Christmas ad created by agency David Sao Paulo, the bears offer life lessons akin to Little Golden Books and continue to give viewers all the feels. 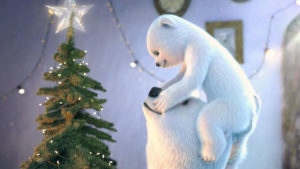 “Christmas Rules” shows the polar bear family readying their home for Christmas. House rules are simple: if you need help, ask; keep traditions alive; connect with loved ones far away; and always have room for one more guest.

Set to a cover of Phillip Phillips’ “Home,” the ad ends with a neighbouring penguin family joining the bears for dinner.

“We’re bringing back the Coca-Cola Bears to talk about ‘Christmas Rules,’ which is a follow-up campaign to our ‘Household Rules’ campaign from earlier this year,” said Rafael Donato, creative vice president at David Sao Paulo.

“Household Rules,” which launched last summer, also used a cover of “Home” and highlighted house rules that many of us learned as kids—but might need to be reminded about in an era of polarisation and chronic incivility. Some examples from that earlier spot: Always keep promises, share, listen, and dry a loved one’s tears.

Coca-Cola’s polar bears were invented by creative strategist Ken Stewart, inspired by his pet Labrador that had always reminded him of a polar bear. Working with cutting-edge animation house Rhythm & Hues and agency CAA, he brought the concept to life in time to air in an ad called “Northern Lights” during the 1993 Academy Awards.

In the 25 years since, the polar bears have been a central pillar of Coca-Cola’s brand identity.

Coca-Cola’s Polar Bears, Now 25 Years Old, Return to Share Their Rules for a Loving Household added by Newsroom on November 20, 2018
View all posts by Newsroom →