By Newsroom on April 25, 2018Comments Off on Colorado-Based Fat Tire Enlists an ‘Actual Belgian’ to Promote its Belgian White Beer

Craft beer brewery New Belgium is based on the front range of the Rocky Mountains in Fort Collins, Colorado, and not, as some might think, in a small European country wedged between France, Germany and the Netherlands.

The makers of the popular Fat Tire beer, however, are connecting their products to the country and its rich brewing traditions by having an actual Belgian man promote the brand’s new Belgian White beer.

Working with its agency of record, Erich & Kallman, New Belgium recently launched the Belgian White with a campaign of spots that will run across Facebook, Instagram, Snapchat and Hulu, featuring the quirky admissions of a bearded “actual Belgian” stating why Belgian White is a better beer.

Since Fat Tire’s Belgian White is not brewed in Belgium but the United States, the campaign’s spokesperson, Flemish actor Karel Deruwe, gives his endorsement, armed with his Belgian accent and witty punchlines. Deruwe delivers a series of performances that highlight the quality and freshness of ingredients used in Fat Tire Belgian White.

In one, ‘Three Truths,’ Deruwe tells three things he knows to be true: that Belgian White has a perfectly balanced sweetness; his middle name is Stacey, and he wears a size five shoe…children’s. In ‘Hint’ he says that the beer has a “hint of Seville orange peel. And every Belgian knows, a hint is always better.” He goes on to say that he wouldn’t tell his friend flat out that he lost his dog. He would merely hint at it, “like a true Belgian would.” 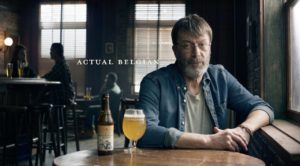 & Kallman co-founder and creative director commented: “Competition in the Belgian White space includes Blue Moon and many others. But while almost everyone else in the category is simply showing their product and listing its attributes in straight-forward and forgettable ways, our Belgian spokesman gives you something to like and someone to connect with. It’s a character you’ll look forward to seeing again and again. It’s advertising you’ll remember, and possibly even talk about and share.”

The rest of the videos can be watched at the New Belgium Brewing YouTube Channel.

Colorado-Based Fat Tire Enlists an ‘Actual Belgian’ to Promote its Belgian White Beer added by Newsroom on April 25, 2018
View all posts by Newsroom →