By Newsroom on May 24, 2018Comments Off on Dalston’s Unveils a Bold New Look and Launches Three ‘Punchy’ Flavours 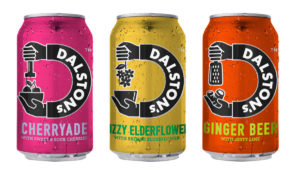 Hot on the heels from gaining distribution in 200 Waitrose stores (as of March 26th), craft soft drinks brand Dalston’s has just launched three flavours and got a new look. It all follows a solid year of growth for the young East London company – also helped by winning distribution via Ocado, Whole Foods Market and As Nature Intended.

Joining its canned line-up are a clean, palate-pleasing Fizzy Elderflower using wild-harvested British elderflower and a vibrant Cherryade crafted with Morello sweet and sour cherries. The third addition is a new, more crisp and fiery, blend of its original Ginger Beer. All three are subtly blended with British spring water and a balanced amount of beet sugar for an adult taste profile.

Dan Broughton, Dalston’s MD said: “Our 2017 cans’ launch was a real hit; we ended up selling over 600,000 units, which was our most successful launch ever! Thanks to this and Waitrose’s subsequent endorsement, a start-up with a small East London brew yard is making the leap into being a credible national player. Combined with our significantly increased production capacity, this brilliant new trio will help us keep up with the huge consumer demand for better soft drinks. They also continue our commitment to real change in this market – avoiding artificial sweeteners, never compromising on taste and always using ‘real’ ingredients. Whether its Nigerian kola nuts or Sicilian blood orange extract, we’re only interested in the best that’s out there.”

Along with the new flavours hitting the shelves, Dalston’s has revamped its packaging. A more striking design reflects what the firm calls the ‘punchy’ flavours and actual colours of the drinks themselves. Its cans are now fully coloured for maximum impact – with hand-drawn illustrations reflecting the honest approach it takes to its ingredients.

Broughton continued: “In the same way that craft beer has exploded in popularity over the past few years, we’re now witnessing a sustained rise in demand for more honest, additive-free and better-tasting soft drinks. Also, as consumers are embracing alcohol-free alternatives at home and on nights out, they’re looking for more exciting soft drinks than the usual sugar-heavy suspects.”

Dalston’s approach to sugar – unlike many – has seen it relaxed about the upcoming sugar levy. All of its flavours come in below the 8g limit, with each drink containing 6.5g to 7.2g of beet sugar per 100ml. That’s meant it hasn’t had to mess with its recipes, be forced to use artificial sweeteners, nor compromise on taste or ramp up its prices.

Dalston’s Unveils a Bold New Look and Launches Three ‘Punchy’ Flavours added by Newsroom on May 24, 2018
View all posts by Newsroom →