By Newsroom on October 30, 2013Comments Off on Diageo: ‘Guinness Jonathan Ross Tie-up Missed The Mark’

Diageo has admitted a recent Guinness ad campaign, which saw it take over all three ad breaks during Saturday night’s (26 October) Jonathan Ross Show, failed to live up to the brand’s legacy of iconic marketing after it was criticised by viewers for being “painful” and “contrived”.

The media buy, a first for the lager brand, used the #RoundUpYourMates hashtag to encourage fans to show their support for spots on male bonding – a key pillar of the Guinness brand’s multimillion “Made of More” marketing strategy. The hashtag was quickly hijacked by viewers, however, who used it to call out the brand for the campaign’s perceived lack of credibility.

Ed Pilkington, marketing and innovation director for Western Europe conceded, the campaign had not resonated with viewers in the way it had hoped, adding the brand had shot for a 10 in terms of creative execution but “missed”. The thinking stems from Diageo’s “more magic, less logic” approach to marketing, which encourages marketers to take creative risks and additional responsibilities. 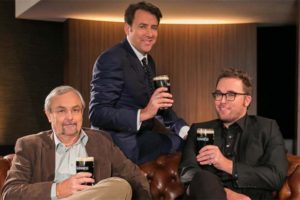 Pilkington commented: “We realise the campaign hasn’t worked in the way that we wanted it to and that’s something we’re addressing at the moment. It didn’t have the same tone of voice in the way recent ‘Made of More’ campaigns like the wheelchair ad was able to resonate with people.”

“We’ve only just started assessing why people reacted to it in the way that we did, but we’ll take those learnings on board with the exciting content-based work we’ve got coming up for the brand. We encourage our marketing teams, creative partners and media agencies to be innovative and that means shoot for 10. You might not always get that target but that shouldn’t prevent you from trying new things and pushing the boundaries

Guinness is gearing up for further content-based activations in the coming months as part of wider efforts to court younger drinkers and kickstart sales.