By Newsroom on August 31, 2016Comments Off on Diageo Hits Back After ‘Irresponsible’ Captain Morgan Ad Banned

An ad by Captain Morgan has been banned by the Advertising Standards Authority (ASA) for implying that drinking alcohol could contribute to an individual’s popularity and “enhance personal qualities”.

The TV ad, which aired in May, shows a party on an old-fashioned wooden sailing ship. A man with Captain Morgan’s face superimposed over his own was shown dancing with friends and using a rope to swing from one deck to another.

Meanwhile, on-screen text stated “Captain the dance floor” and “Captain the night”. A range of Captain Morgan products appeared alongside text stating “Live like the captain”.

It was investigated after charity Alcohol Concern and a member of the public challenged whether the ad was reckless for implying that drinking alcohol could contribute to an individual’s popularity or confidence and that the success of the social occasion depended on the presence or consumption of alcohol.

Diageo argued the ad aimed to emphasise the attitude the brand embodied – one of camaraderie, enjoying time with friends and living life to the full. It added that the man with the Captain Morgan face was not shown to be more popular, confident or self-assured than the other partygoers. There was no transformational moment at which point his behaviour was shown to change, whether due to the consumption of alcohol or association with the Captain Morgan brand.

Although the ASA agreed that the ad did not imply that the success of the social occasion depended on the presence or consumption of alcohol, it disagreed with the confidence issue. 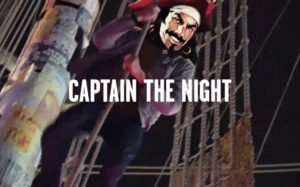 The ASA explains: “Although the ad did not explicitly depict drinking alcohol as resulting in a change in the central character’s behaviour in a ‘before and after’ scenario, we considered that the superimposed Captain Morgan face implied that he had already consumed the product and thus linked his confident behaviour to this consumption.”

As a result, the ASA concluded the ad implied that drinking alcohol “could enhance personal qualities” and was therefore irresponsible.

The ASA told Diageo that the ad must not appear again in its current form and not to imply that alcohol could enhance people’s confidence.

Julie Bramham, European marketing director at Captain Morgan, says while Diageo is “pleased” that the ASA chose not to uphold part of the complaint, it disagreed with its interpretation of the rest of the ruling.

She adds: “No alcohol was pictured and the Captain Morgan face was designed to represent the brand as a whole and not intended to be linked to the consumption of alcohol. We believe that the advert illustrated camaraderie, enjoying time with friends and living life to the full while taking charge of a night out and staying in control.”

Diageo Hits Back After ‘Irresponsible’ Captain Morgan Ad Banned added by Newsroom on August 31, 2016
View all posts by Newsroom →