By Newsroom on August 21, 2018Comments Off on Drama, Passion and Dr Pepper Fuel Fansville in College Football Campaign 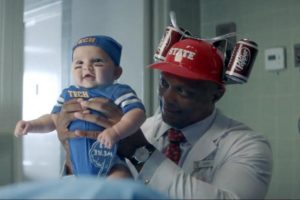 The episodic-like campaign, created by Deutsch, tells the stories of passionate fans in a fun and humorous way through recognisable characters such as Brian Bosworth, Eddie George and Les Miles. Dr Pepper premieres the first of its six 30-second campaign spots on Monday, August 27, with others airing throughout the college football season on ESPN, CBS and FOX.

“Fansville further solidifies our longstanding commitment to college football, as we eagerly kick off the 2018-2019 season,” said Derek Dabrowski, Vice President of Dr Pepper Brand Marketing at Keurig Dr Pepper. “Fansville is where college football is 24/7, 365 – and Dr Pepper is fuelling that incredible fandom, the fans’ hope, rivalry and competition, every step of the way.”

Directed by 10-time Emmy Award nominee, Jonathan Krisel, the series celebrates the unpredictable highs and lows of college football fandom, and the dramatic twists and turns of the season. In Fansville, where college football and Dr Pepper are tantamount, people will say and do anything to prove their fandom. Whether a surprising twist or a whodunnit cliffhanger, each instalment of Fansville builds anticipation for the next. Additional plots will be presented exclusively on digital and social media. 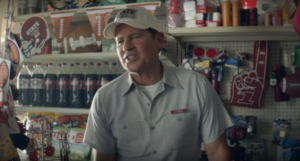 The star-studded cast of Fansville by Dr Pepper features many recognisable faces in college football including Brian Bosworth as ‘Sheriff’, Eddie George as ‘Doctor’, and former coach Les Miles as ‘Store Clerk’.

“I’ve taken on many roles throughout my career and I’m pleased to add Fansville ‘Sheriff’ to my resume,” said Bosworth. “It’s an honour to be associated with a great brand such as Dr Pepper. They’ve done a great job capturing the passion of college football fans. I think fans will really enjoy these new spots.”

Fansville by Dr Pepper builds toward a climactic finale during the most epic part of the season – The Playoff, college football’s knockout tournament to determine the national champion. The series of spots will culminate with a ‘season finale’ during the National Championship on January 7th, 2019. Fansville will also appear across digital, print, radio, OOH advertising, as well as on Dr Pepper’s social media platforms throughout the season. 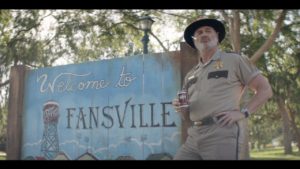 “Dr Pepper has a strong association with college football and this new campaign continues to build on that in a powerful way,” said Brett Craig, EVP, ECD, Deutsch. “We understand the emotional rollercoaster that is college football fandom and we brought this to life through a sensational drama TV series. We can’t wait for fans to get sucked into the drama of Fansville.”

The launch of the marketing and advertising campaign complements other key activations for Dr Pepper, including this year’s 10th anniversary of the Dr Pepper Tuition Giveaway, which has awarded over $10 million to college students, as well as the extension of its official sponsorship of the College Football Playoff and Presenting Sponsorship of the National Championship Trophy through 2026.