By Newsroom on May 16, 2016Comments Off on England Footballers & Fans ‘Invade’ France in Mars Ad for Euro 2016

England footballers lead an armada of fans across the channel to France in Mars‘ new campaign ahead of the Euro 2016 football tournament.

The £5m campaign, created by Abbott Mead Vickers BBDO, is attempting to align the chocolate bar with support for the team and will see the product’s packaging show the word “Believe” instead of the Mars logo.

Launched on May 15 with a 60-second TV ad, the campaign will also run across cinema, radio and digital in the run-up to the tournament, which begins on 10 June.

When they land on a French beach, a man dressed as a medieval knight asks for directions to the Stade de France, the country’s premier football stadium which will host the opening ceremony on 10 June and final on 10 July. 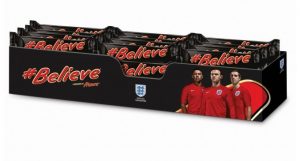 Mars will also call on the public to submit “singing selfies” – filming themselves as they sing the lyrics to an England song and sharing this online using the campaign hashtag, #Believe. “Singing selfies” will be launched on the day of England’s first match on 11 June.

The spot was written by Michael Hughes and art directed by Dalatando Almeida. Sam Brown directed the ad through Rogue Films, while MediaCom handled the media planning and buying.

Mars has been an official sponsor of The Football Association, the organisation which administers English football and the national football team, since 2009.

Greg Kent, the brand manager for Mars, said: “International football tournaments ignite the passion of England fans like no other sporting event. Up to 20 million people are set to watch each match at Euro 2016 with a potential audience of 15.3 million UK football fans predicted to be on Twitter at any one time during a game. As we all know, the 12th man can make all the difference in football, and through our multi-channelled campaign we hope we can give the England football team the extra edge they need to go all the way in France.”

England Footballers & Fans ‘Invade’ France in Mars Ad for Euro 2016 added by Newsroom on May 16, 2016
View all posts by Newsroom →