By Newsroom on March 13, 2013Comments Off on FAGE UK Launch FRUYO Yoghurt

This is the first NPD that FAGE UK has launched since its TOTAL 0% Greek Yoghurt split pot range in February 2011.

Perfect for breakfast, as a snack or a dessert, this conveniently sized, on-the-go yoghurt will initially be sold through Waitrose and Ocado and will appeal to customers who have already bought in to the thick, creamy, quality taste of TOTAL. 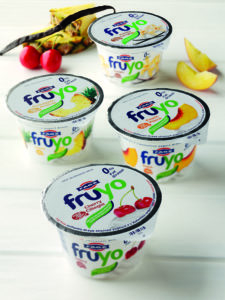 FRUYO will be available in four flavours – peach, pineapple, vanilla and cherry, with others planned for later in the year. It will be positioned next to its sister brand, TOTAL Greek Yoghurt on the supermarket shelves.

“What makes TOTAL Greek Yoghurt so popular with consumers is its authentic, creamy taste and additional nutritional benefits, which include higher levels of protein than most regular yoghurts. In this respect, FRUYO is not dissimilar and will appeal to foodies, slimmers and fitness enthusiasts alike.”

According to Nielson, the chilled yoghurt market is worth £1.2bn-a-year of which 164 million is owned by the Greek or Greek style category.

“We have been operating in the UK for 30 years and know the Greek Yoghurt business well.  The Greek/Greek Style category has been one of the fastest growing in the last decade, with many new additions regularly being introduced into the UK market.”

“Despite this, TOTAL remains the number one authentic Greek Yoghurt and is renowned for its quality, taste, heritage and authenticity. We are therefore confident that FRUYO will follow a similar route and become a much loved household brand,” added Amos.

FRUYO will initially be supported by PR, Social Media, Digital and Sampling and will be available from Waitrose from March 11th and Ocado later in the month.