By Newsroom on September 23, 2014Comments Off on Family (and friends) Help Traidcraft’s Geobar Reposition Itself 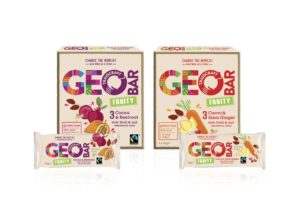 Family (and friends) have helped Traidcraft’s flagship retail brand Geobar reposition itself for a broader target of consumers looking for healthy, on the go snacks.

Although sat in one of the most crowded categories in the multiples, Geobar has a unique proposition beyond taste and health – it’s the UK’s only range of bars carrying the Fairtrade Mark, with ingredients hand-sourced from all over the world by a team of experienced and pioneering fair trade buyers. 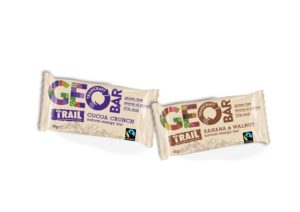 This insight is celebrated through the re-imagining of the Geobar identity; textiles, flags and global patterns are woven into the logo to add ‘local and natural flavour, brightly coloured illustrations emphasise taste, along with other subtle travel stamp-like motifs to strengthen the global cues.

“The tagline ‘change the world one bite at a time’ is retained, but the brand will also put greater emphasis on the role played by the consumer in making fair trade happen – back of pack and other communications will talk up the importance of buying 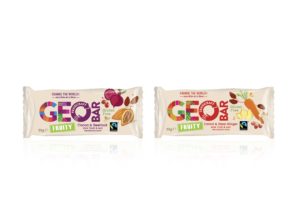 fair-trade, with the belief that ‘the greatest fair trade ingredient is you’ according to Derek Johnston, Strategy Director at F&f.

The new shelf impact driven look rolls out across all products in the range from September this year, available in Tesco and ASDA across the UK, as well as providing a strengthened image for fair trade channels, in heartlands such as churches and schools.

F&f has been working in collaboration with Traidcraft on Geobar and other brand projects for over 5 years. The agency has developed a specialism in helping small, fair-trade and ethical brands get seen by wider consumer groups.

Family (and friends) Help Traidcraft’s Geobar Reposition Itself added by Newsroom on September 23, 2014
View all posts by Newsroom →