By Newsroom on April 28, 2018Comments Off on FCB Chicago Urges Indulgence in New Ads for Blue Bunny Ice Cream

That’s the message and the tagline at the heart of a new ad campaign from FCB Chicago for Blue Bunny ice cream treats.

Blue Bunny is a unit of Well Enterprises, the Le Mars, Iowa-based company that bills itself as the largest family-owned ice cream maker in the nation. 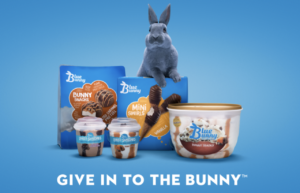 won the Blue Bunny business late in 2017, and this is the first major work on the new account from the agency.

A blue bunny character, not surprisingly, has been the mascot for the Blue Bunny brand for a while. But FCB has reworked the bunny to give it a more adult profile. This new Blue Bunny has an all-blue coat of fur and a new voice that manages to make the bunny sound both funky and, well, a little depressed.

However you feel about the bunny’s voice, he’s there in the new commercials to encourage various ice cream devotees to give in to their fun side and their craving for real ice cream treats, even if the treats are a little on the rich and indulgent side.

Two new Blue Bunny commercials highlight two particular treats in the Blue Bunny portfolio. One is a new item, Load’d Sundaes, which, as the name implies, are cups of ice cream mixed with various items such as chocolate bits. The other product is Bunny Snacks, bite-sized ice cream treats.

as parent Wells and FCB are rolling out a campaign for Blue Bunny that encourages consumers to indulge wholeheartedly in the brand’s rich ice cream products, there’s also a new campaign from FCB for Wells’ Chilly Cow “light” ice cream brand. Yea, the kind that’s supposedly healthier for you.

So there you have it. Two ice cream brands with two different advertising strategies. Consumers will have decide whether to give in to the bunny or opt for the healthier approach.

Our hunch is the bunny will win this battle.