By Newsroom on March 21, 2016Comments Off on Flavour is Calling in New McCoy’s Spot from WCRS

McCoy’s is back on TV screens with a new creative, positioning itself as a brand that’s famous for delivering on flavour. To deliver strong cut through and get McCoy’s on consumers’ shopping lists, a heavyweight and targeted £3m marketing campaign is being put behind the launch, including an all-new TV advert titled ‘When Flavour Calls’.

Live from 18th March, the new advert communicates McCoy’s superior flavour by showing viewers what would happen if ‘Flavour’ literally were to call, featuring across popular TV networks; ITV, Channel 4, Channel 5; digital channels and online throughout 2016.

As well as the heavyweight above the line campaign, McCoy’s will be driving further visibility in-store and in-depot via a raft of eye-catching display solutions. High-impact outdoor advertising describing McCoy’s’ flavour experience will also be unveiled on six sheets nationwide from April 10th. 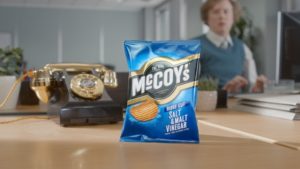 Andy Riddle, Branded Sales Director, KP Snacks, says: “McCoy’s is a hugely popular brand with strong heritage. Already worth over £100m , this year we are continuing to ramp up investment in the brand as we look to appeal to a wider population of snackers with our improved and even stronger flavour. Our new TV campaign is a great way to create noise around McCoy’s’ taste credentials, bringing new consumers into the brand and significantly driving overall category sales. Retailers can capitalise on the upcoming mass marketing awareness and really drive growth in their Crisps & Snacks category by stocking a wide range of McCoy’s packs and using our extensive choice of POS to maximise stand-out and visibility in store.”

The campaign by creative agency WCRS, builds on momentum of the brand’s recent product upgrade which is designed to give shoppers an even stronger flavour and an even better texture across the entire McCoy’s range.

Billy Faithfull, Executive Creative Director, WCRS, says: “When flavour calls, when you need to taste your crisps, I mean really taste them, McCoy’s are top of the pile. They’re sharper than a samurai sword in a suit, they’ve got more sizzle than a King Prawn in a cocktail dress. We’re really excited about relaunching the McCoy’s brand under this simple proposition; that for people who want flavour in their lives, there’s only one brand for them.”

Flavour is Calling in New McCoy’s Spot from WCRS added by Newsroom on March 21, 2016
View all posts by Newsroom →